You are at:Home»Current in Carmel»Carmel Cover Stories»Surprise, sister!: Woman travels around the world to meet 2 siblings after shocking DNA test results

Adopted by her parents as an infant, she said they tended to be overprotective of their only child as they raised her in a small British town in the 1950s.

As a teen, she became more curious about her birth family after stumbling across a document listing her birth mother’s name, but she didn’t attempt to obtain her original birth certificate until years later after moving to Australia and later New Zealand. As it turns out, British law makes that extremely difficult to do long distance for people adopted before 1978.

But then she had another idea. In 2018, she took a DNA test, hoping to find a cousin or distant relative who could help her learn more about her family roots.

The results revealed something she never expected.

“I burst into tears. I just couldn’t believe it,” Lee, 68, said of the results. “All weekend I was in a daze because I thought I’ve been by myself all this time and I have a sister. And when I contacted (her), she said, ‘You have another sister!’”

‘It worked out perfect’

Only two months before, Carmel resident Debra Valiyi took the DNA test to learn about her ancestry. She was surprised to discover that she was only 53 percent British, but a much bigger shock was in store.

Weeks later, she received an email from Lee stating the DNA test showed they were sisters. Valiyi alerted her older sister, Dorica Robinson, who was just as shocked by the news.

“(The first time I saw) the photograph she sent of Sandie I cried, because she looks like my mum,” said Robinson, 62, who still lives in her birthplace of Leicester, England. 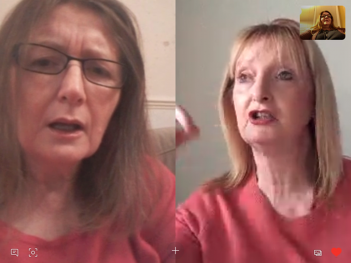 Dorica Robinson, left, and Sandie Lee wore the exact same shirt the first time they Skyped with each other. (Submitted photo)

The sisters set up a time to video chat and felt an instant bond. Lee and Robinson wore the same peach shirt from the same retailer, even though Lee was in New Zealand and Robinson was in England, which were experiencing opposite seasons.

They discovered other similarities as they got to know each other, including that Lee and Robinson had both named their oldest daughters Rebecca and that Lee and Valiyi had been through divorces. They all remember fond visits to Swiss Cottage, a Leicester café where they enjoyed cherry pie, and wonder if they ever ran into each other there.

Lee was born in Blackpool, 140 miles away from Leicester, but the adoption agency placed her with a family in Leicester, where her birth parents eventually relocated and is the birthplace of Robinson and Valiyi. The girls grew up approximately 4 miles away from each other, and Lee attended school with one of her cousins, although they had no idea at the time they were related.

Valiyi, 60, said she wishes she could’ve known Lee growing up, but she is thankful to have had the support of an older sister in the past year. 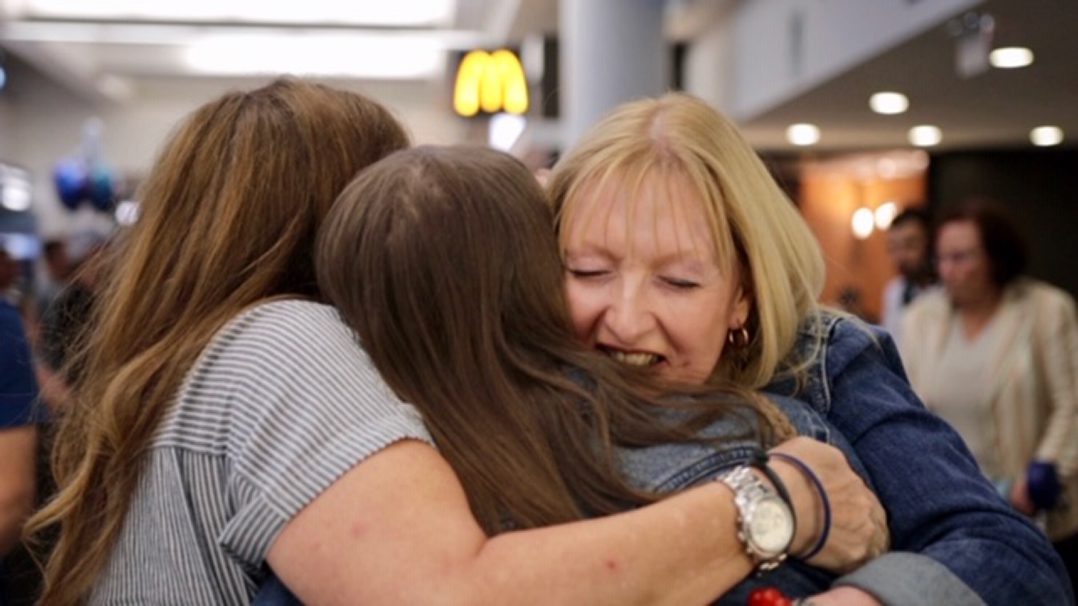 From left, Debra Valiyi and Dorica Robinson hug their sister Sandie Lee as they meet for the first time Aug. 4 at Chicago O’Hare airport. (Submitted photo)

As the sisters forged emotional bonds, they began planning a trip to meet in person.

“It’s frustrating that there are three of us and we’re all on different continents,” Robinson said. 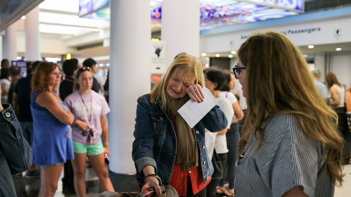 Eventually, the sisters decided to visit Vailyi’s house because she has the most space to host guests. Robinson and Lee flew into Chicago’s O’Hare airport minutes apart Aug. 4. Valiyi first connected with Robinson, whom she hadn’t seen since their mother’s funeral in 2014. It wasn’t long before they finally met Lee, who, once again, inadvertently wore a jacket nearly identical to Robinson’s.

“Those two laughed, and I burst into tears,” Lee said of the first meeting.

The sisters drove to Carmel, chatting as most sisters would, except with a lot more catching up to do.

They’re spending a week in Indiana before heading to Nashville, Tenn., where Valiyi’s daughter lives, on their way to a week in Key West. They’ll stop in Nashville again on the way back and rejoin Valiyi’s daughter and be joined by her other two children and Robinson’s daughter, who will meet her aunt for the first time.

“The kids are so excited,” Valiyi said.

The sisters are thrilled to have finally met each, but they are puzzled about their mysterious past. Their father died in 2001 and their mother in 2014, so they never had a chance to ask their parents about what happened. Lee’s adoptive parents also have died. 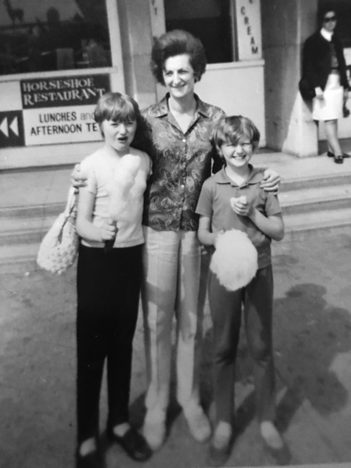 Valiyi said some of her older cousins have acknowledged knowing about Lee, but they never said anything about her until Valiyi recently asked. She and her sisters determined that Lee was born before her parents got married, which would have been taboo in 1950s England. They believe their mother gave Lee up for adoption to avoid embarrassing the family.

Lee said she’s never felt any ill will toward her birth parents and that she thought of them often.

Valiyi and Robinson believe she was. But she never hinted at it.

“It’s crazy, because everything that you’ve always known was not right. Then it’s sad, because why didn’t my mum tell me? Why didn’t she just say something?” Valiyi said. “I feel bad that she must’ve carried that all her life. It was her secret, and she never felt she could open up.” 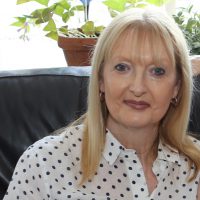 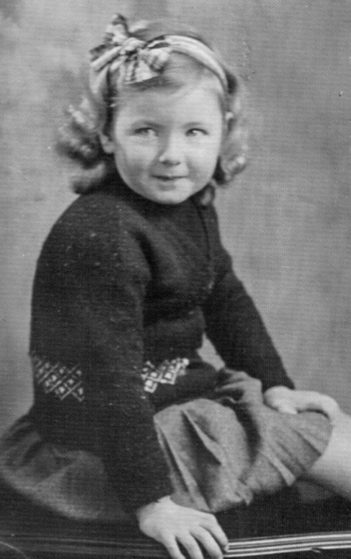 Sandie Lee as a child

Favorite quote: “Do what you feel in your heart is right, for you will always be criticised anyway,” Eleanor Roosevelt

Motto to live by: Live everyday as though it is going to be your last, because one day you are going to be right. 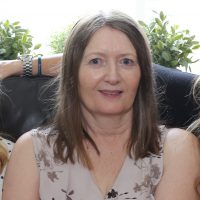 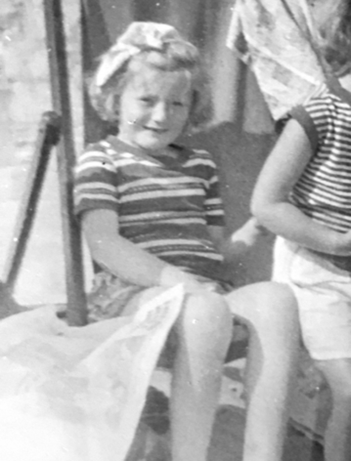 Dorica Robinsoni as a child

Favorite quote: “Happiness is a journey, not a destination.”

Motto to live by: Treat others how you wish to be treated yourself. 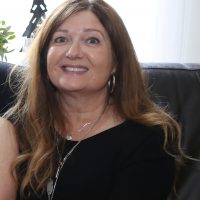 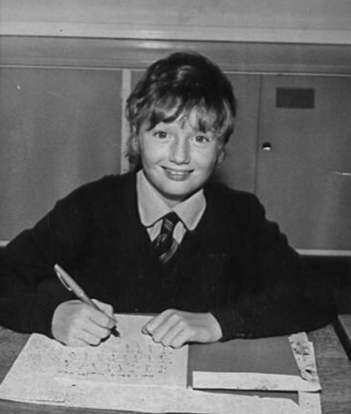 Debra Valiyi as a child

Favorite TV Show: Whatever I’m watching at the moment

Favorite quote: “Don’t judge a person by the colour of their skin, judge them by the content of their character,” Martin Luther King, Jr.