You are at:Home»Current in Carmel»Carmel Community»64 townhomes proposed on Rohrer Road

Lennar Homes of Indiana is proposing 64 townhomes on 6.8 acres between Rohrer Road and the Monon Trail, but the plan has some neighbors and Carmel officials concerned about density and other issues. 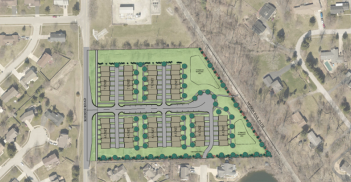 Several people who live near the proposed development told the commission that they fear the project will lead to increased traffic and negatively affect home values in the surrounding areas. They also expressed concerns about the aesthetics of building townhomes in an area surrounded by single-family homes, but Jon Dobosiewicz, a land use professional representing the developer, said it’s not uncommon in Carmel.

“There are numerous examples of a mix of townhomes and other residential housing projects throughout our community,” he said, using the Townhomes at Hazel Dell as an example. “They’re not all just concentrated within a core area of the community.”

CPC President Brad Grabow said he is concerned about the density of the proposal.

“This looks like every square inch of this site has living units available for sale crammed on it,” he said.

The CPC’s residential committee will discuss details of the project at its Sept. 3 meeting at Carmel City Hall.