Carmel saxophonist Rich Cohen sees the Indy Jazz Fest as a perfect means for exposure for his group with pianist Chris Rutkowski.

“It’s our first time playing together at Jazz Fest,” Cohen said. “It’s a great opportunity for Chris and I to get more visibility for the group.” 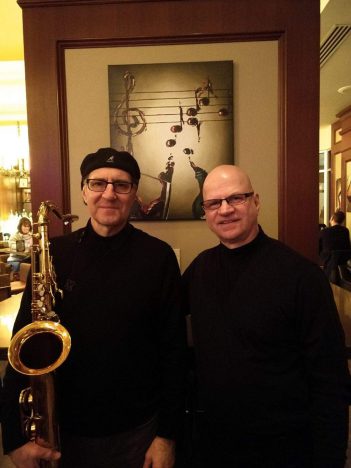 Rich Cohen, left, and Chris Rutkowski will appear at the Block Party Sept. 21 on the final night of Indy Jazz Fest. (Submitted photo)

The Cohen/Rutkowski Project will perform at the Block Party Sept. 21. It’s the final day of the Indy Jazz Fest, which starts Sept. 12. Cohen’s band will be one of 12 performing from 4 p.m. to midnight on two stages inside and outside of the Jazz Kitchen, 5377 College Ave., Indianapolis.

“We’ve had this group for two years,” Cohen said. “Chris is a great composer. He has a Ph.D. in composition, and he taught composition for several years. The group is kind of a vehicle for both of us to do our improvisational thing.”

The quartet was started by Cohen and Rutkowski.

“Our regular bass player and drummer couldn’t make it, so we will have two players filling in that are great players in their own right,” Cohen said.

Brandon Meeks, bass, and Dorian Phelps, drums, are filling in. Phelps is the son of well-known drummer Kenny Phelps.

Cohen and Jeff Conrad, a Carmel resident, performed as Avenue Indy in the Jazz Festival in 2018.

Cohen works as a technical writer for a software company.

“We have a duo with Chris that has regular engagements,” Cohen said. “I play with another piano player and I still have some gigs with Jeff Conrad. Jazz musicians are sort of guns for hire, in a sense.”

“I’d love to just be a full-time musician at this point in my life, but I have a ways to go yet,” he said.

Cohen was in a short film, “Go Get Your Horn,” which won the Heartland Indiana Spotlight Award in 2016.

Cohen used to play in a monthly jam session at the Jazz Kitchen in Broad Ripple. Clifford Ratliff ran the jam session.

“There was a drummer (Tim Taylor) who used to go and turns out his real passion is documentary filmmaking,” Cohen said. “Since I was a regular, he invited me to be part of it, which was kind of fun. It was pretty neat.”