I thought it was going to be a laid-back trip to our nation’s capitol to visit war memorials and then home to tell everybody we had a good time. I was wrong.

Indy Honor Flight 31 was carefully orchestrated to honor veterans of three wars. There were 85 of us, and each had a guardian who was instructed, among other things, to never leave our side. 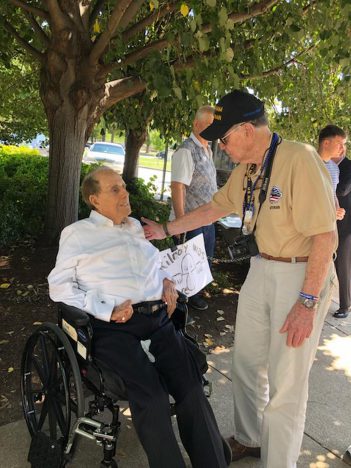 There were a handful of World War II veterans going to visit a memorial that had taken 60 years to build and another 14 years of waiting to see. When these men got home from Europe or the Pacific, they didn’t take time to talk about what they’d seen or done. They went to school, got to work, married and raised families. They carried the war with them.

Honor Flight 31 changed all that. The memorial contains a spire for every state and territory that was part of the war. Each man on Saturday connected with the place he called home.

Since the Korean War was at the time “just a police action,” a memorial was a long-time coming. But on this day, these veterans stood before a haunting group of 14 soldiers on patrol, soldiers sculpted in stainless steel, eternally vigilant, eternally sacrificing.

The Vietnam Wall, black and silent, bears the names of 57,939 American servicemen who died during a 20-year span between Nov. 1, 1955 and April 30, 1975. Memorial volunteers were busy making rubbings of names of friends we left behind.

Mine friend’s name was Walter Gelien. He was killed in 1965 in Da Nang when a Vietcong insurgent threw a hand grenade into the helicopter where he was on watch. I knew him as a fellow officer candidate at Navy OCS. He left before commissioning to continue working as a combat medic, a job he had done for more than 20 years.

We started the day at 4:30 in the morning and got off the plane in Washington, D.C .shortly after breakfast. Literally hundreds of men, women and children greeted us, shook our hands and thanked us sincerely for our service. Others cheered, waved signs and shouted greetings as we boarded buses.

At the entrance to the World War II Memorial, retired Sen. Robert Dole (Kan.), now 95 years old, sat in a wheelchair to personally greet each one of us. Our guides told us he is at the memorial to welcome every Honor Flight.

Even though the day moved quickly, we had time at every stop to reflect and deal with long-forgotten memories. On our return flight, the tone was one of subdued reflection.

Family and friends gathered to welcome us home. For many, it was the homecoming they had waited for years to receive.