The Westfield City Council met Sept. 23. Councilors Chuck Lehman and Cindy Spoljaric were absent. The next council meeting will be at 7 p.m. Oct. 14 at City Hall, 130 Penn St. For more, or to see an agenda, visit westfield.in.gov/council.

What it means: Petitioner Alpha Tau Enterprises requested to rezone approximately 8.42 acres at 510 E. Ind. 32 from enclosed industrial to general business to make way for a new commercial development. The ordinance was approved 4-0. 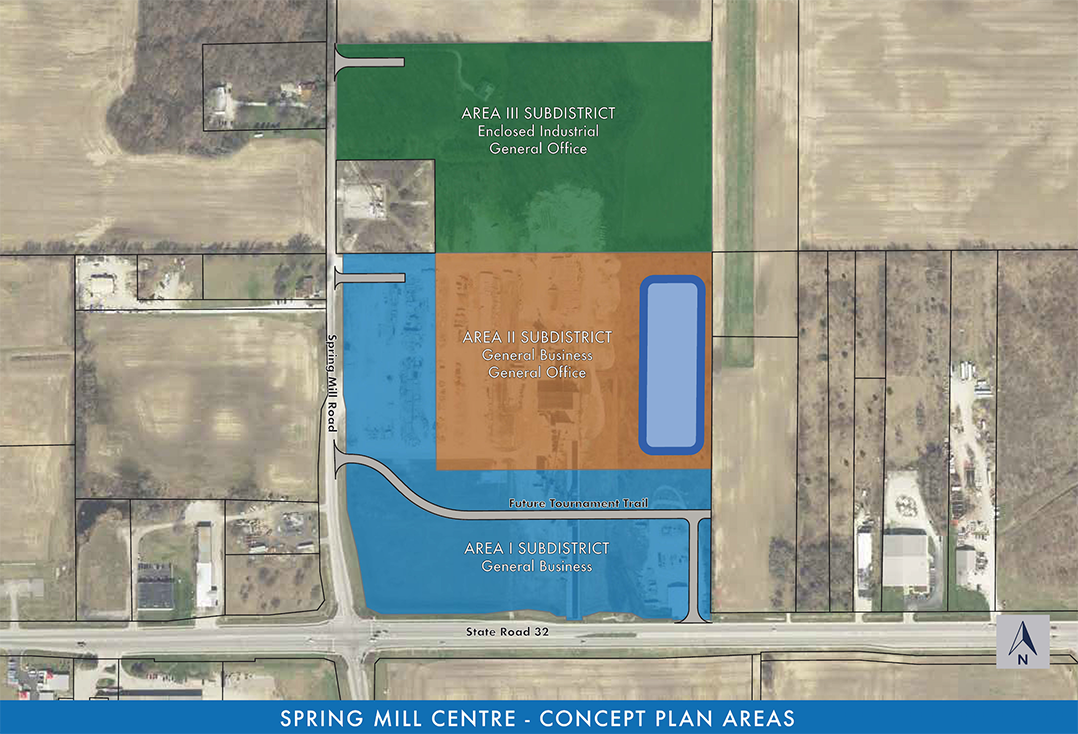 Spring Mill Centre, at the northeast corner of Spring Mill Road and Ind. 32, is set to have a variety of new business at the intersection. (File map)

What it means: Zentz Consulting requested a change in zoning for the Spring Mill Centre planned unit development at the northeast corner of Ind. 32 and Spring Mill Road to change zoning on a 57-acre plot from enclosed industrial, open industrial and agriculture/single-family rural district to general business and enclosed industrial.

The ordinance was approved, 4-0.

What happened: The council approved a rezoning request for Cedarbrook Commons.

What it means: Petitioner Craigielea Enterprises, LLC by William Tres Development requested rezoning approximately 16 acres at the northwest corner of 186th Street and Spring Mill Road from agricultural/single-family rural to local business for a commercial development, to be known as Cedarbrook Commons. The ordinance repeals and replaces the Springmill Trails planned unit development.

The council approved the ordinance, 4-0.

What happened: The council approved a rezoning request for Springmill Pointe.

What it means: Petitioner Westfield Investment Co. requested a change in zoning to general business for a commercial development, Springmill Pointe, on approximately 8.55 acres at the southwest corner of Ind. 32 and Austrian Pine Way. The ordinance repeals and replaces the Maple Knoll planned unit development

The council approved the ordinance, 4-0.

What happened: The council approved an amendment to the city’s unified development ordinance.

What it means: Initially adopted in September 2014, city staff requested several changes to the unified development ordinance, which include changes to triplex and quadraplex standards, side setbacks, perimeter landscaping for shared parking areas, subdivision block parties and more. The amendment also sets open-space standards for new development, requiring a minimum of 50 percent of a development’s open space not be encumbered by wetlands, legal drains, easements and similar land.

The amendment was approved 4-0.

What happened: The council approved an amendment to traffic regulations in the city.

What it means: The Westfield Dept. of Public Works requested an amendment to some regulations in the municipal traffic code. The DPW said the proposed changes are a result of the city taking ownership of new roads because traffic regulations were updated last year. Changes include regulation of roads in new subdivisions, the addition of no parking signs in some neighborhoods, stop control changes at Ind. 32 and Ditch Road and Gunther Boulevard and Heathcliff Court and speed limit changes in the neighborhoods of Maple Knoll, Maple Village/Sonoma, Viking Meadows and Villages of Oak Manor.

The ordinance was approved 4-0.

What happened: A public hearing was held for two ordinances regarding the 2019 general obligation bond.

What it means: Councilor Jim Ake said the city’s annual general obligation bond is in place as a financial sustainability measure. The bond typically covers costs associated with public safety vehicles and equipment. This year’s bond – not to exceed $5 million – will again finance those items but also will help finance the Jersey Street extension project and technological equipment for the police and fire departments.

A vote will be taken for the ordinances at the Oct. 14 city council meeting.

What it means: If approved, non-elected city staff will receive an approximate 2.6 percent pay increase in 2020.

Because the presentation was only an introduction, no vote was taken. The council will vote at its Oct. 14 meeting.

What happened: City staff introduced an ordinance creating a new fund in the city’s budget.

What it means: If approved by council, Fund 638, the Grand Park Food and Beverage Tax, will be implemented in 2020. Clerk-Treasurer Cindy Gossard said the request to create the fund was received from city administration to move money from the food and beverage tax to the Grand Park bank account beginning in January 2020. Food and beverage tax revenues historically have been deposited into the city’s general fund. The new fund would pay for expenses related to Grand Park.

Because the presentation of the ordinance was an introduction, no vote was taken. The council will vote at its Oct. 14 meeting.