Lauren Russel is having a blast playing this version of “Cinderella.”

“It’s actually even more fun than I thought it would be,” Russel said. “Cinderella actually has a backbone. The prince has a character. He’s not just, ‘I’m a handsome prince and I get what I want.’ Cinderella challenges him at points that if he wants to be king, he better start paying attention to his people. She’s not just a damsel in distress.” 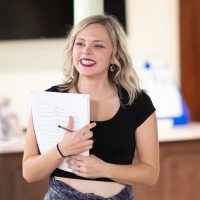 Russel will appear in the title role of Rodgers and Hammerstein’s “Cinderella” Nov. 22 to Dec. 15 at Footlite Musicals, 1847 N. Alabama St., Indianapolis.

The 2009 Lawrence North High School graduate is married to Carmel Fire Dept. firefighter Grant Russel, who appeared in “Singin’ in the Rain” at Footlite earlier this year.

“This is my first show since doing ‘Shrek The Musical’ in 2014,” Russel said. “I took a sabbatical to have kids, so this is getting my feet wet again.”

Russel, a Geist resident who was elected to Lawrence City Council Nov. 5, has two children: Owen, 3, and Landon, 2.

Fishers resident Jill O’Malia is cast as the Stepmother, a stark contrast to her role as the Fairy Godmother several years ago with the Madison County Dramatics Players.

“She’s a complex character to portray. She’s a villain of sorts but with a comedic side,” O’Malia said. “Playing a character like the Stepmother can be very rewarding as an actor, as long as the audience doesn’t mistake you for the character you’re playing. I think it takes a little more work to be a successful villain, since it’s more difficult to portray an unlikeable character.

“Defining the mindset of a villain and discovering where their anger is coming from is very important in developing the character. I’m really having a good time with this role.”

O’Malia said she has played a couple of parts that she would put in that classification.

“Just last spring I had the opportunity to do the role of The Witch in ‘Into the Woods,’” O’Malia said. “The Witch was truly the central antagonist in the show, but rather than being truly evil, she just distrusted people in the world. She was wicked, but still had moments of vulnerability as she dealt with Rapunzel. I also played a completely different type of villainess in ‘Hairspray’, Velma Von Tussle. Velma is scheming, snobbish and would stop at nothing to ensure her daughter Amber was noticed and in the spotlight.”