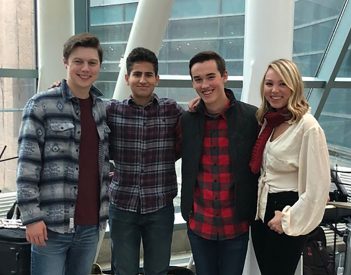 More than 150 performers applied to participate. Rosie and the Thorns was one of only 12 selected.

Last month, the band auditioned for the annual tree lighting and “Circle of Lights” live show, set for Nov. 29. They were not selected for “Circle of Lights,” but were asked back to perform the next night from 6:30 to 7 p.m. Nov. 30 for Downtown Indy, Inc.’s continued holiday celebrations.

Alsatie, Buckman, Inman and Johnson began playing together during the summer.

“The band was created after one of my solo gigs at The Scoop on Main Street (in Carmel),” Inman said. “Ben reached out to me about having interest in singing in a band after hearing me play there. He and Ethan and Joseph had been looking for a singer so they could start a band and look for jobs and playing opportunities. We came up with a small list to try out playing together, and it went very well.

“We clicked and decided to keep going. We had no idea it would be taking us this far.”

Alsatie said he has been playing drums for approximately seven years.

“I grew up listening and playing along to all kinds of music, but I’ve always had a soft spot for jazz, and Christmas jazz is no exception,” Alsatie said. “I’m very excited to be performing with my band, and I believe it will be a good experience for us to perform to a larger audience.”

Inman said she has known Johnson and Buckman since attending middle school in Zionsville. They introduced her to Carmel resident Alsatie when they began attending University High School and played together in pep band and band classes.

“I’ve been playing guitar and singing since I was about 11,” Inman said. “I’ve always enjoyed singing in choir and musicals, so getting a guitar for Christmas was the gateway into the world of playing on a stage (that was) not in a classical or theater sense. The guys also have been playing music for a long time, a lot longer than I have, and are extremely skilled in multiple instruments and are still trying to branch out.”

Inman said the Monument Circle show is a significant opportunity for exposure.

“This performance could put us on the map,” she said. “While we have played some professional, paying gigs prior, after this performance we can hopefully land a couple more offers from larger venues. It’s also important for us because it shows us what we’re capable of doing.

“While the guys are extremely talented, and I had no doubts in them whatsoever, it’s really been fun working with them to be prepared and just have a good time.”

To date, they’ve played at The Scoop, Eagle Fest, University High School’s Fall Fest, various parties and more, but Nov. 30 will be the band’s biggest performance yet.

“We are very excited to play the 30th,” Inman said. “Playing downtown in front of lots of people creates good exposure for us, plus gives us a great experience we can be proud of. Ultimately, we’re very excited to share our music with everyone and get them excited for the season.”

Johnson said the group has played in front of sizable crowds before, “but we are especially excited for this opportunity because we want to contribute to making 2019’s Christmas one people can have fond memories of.”

Because they’re so new, a website is still in progress, but photos and video of local performances can be seen on The Thorns’ social media platforms, @thethornsband on Instagram and Facebook.