You are at:Home»Current in Geist»Geist Community»McCordsville seeks donations for mascot’s medical bills

Oscar the cat has been a frequent sight at McCordsville Town Hall for approximately a decade, and now town staff are seeking donations to establish a fund for the town mascot’s medical bills.

Oscar, who Town Manager Tonya Galbraith estimates is approximately 12 years old, has kidney issues and he was recently shot. 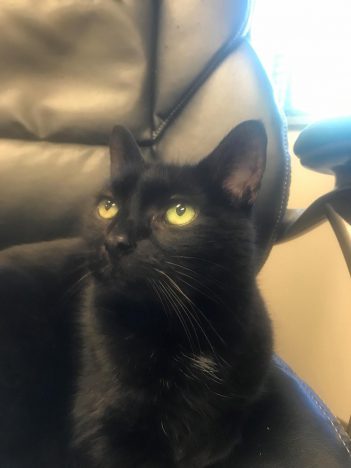 “He’s been shot twice. The first time was several years ago,” Galbraith said. “We don’t know the second time, but we had taken him in (to the vet) because he was acting not so great and the vet noticed he was full of buckshot. That was in December.”

Consequently, Oscar’s medical bills are getting a bid high. The most recent was for approximately $400.

“We wanted to set up a fund to help him out going forward,” Galbraith said.

The town set up a donation box and has raised approximately $500 already.

Galbraith said Oscar, who generally comes and goes as he pleases, is improving.

“He is doing better. He has been staying in a lot more,” she said. “He never roamed too much, but he roamed enough for someone to shoot him. He’s been staying in a lot. He comes and goes as he pleases. He doesn’t go far. We let him outside. We all have a screen out of our windows, so I’ll let him out of my window and then he comes in the window. He has a game he plays.”

Staff can’t feed Oscar treats because he is on a special diet for his kidney problems.

“We are grateful for the support we are getting for Oscar and his medical needs,” Galbraith said. “He’s been with us a long time, so we all have a great affinity toward Oscar. He’s more than just a cat.”