You are at:Home»Current in Fishers»Fishers Community»Fishers, IMPD partner to stop shootings, murders

Richard Garrett Jr. and Rashaana Farrow were arrested Nov. 13, 2019 following a police pursuit with the Fishers Police Dept. and manhunt that led to the shooting death of FPD K-9 Harlej.

The third suspect, Delance Hatcher, had already been arrested. 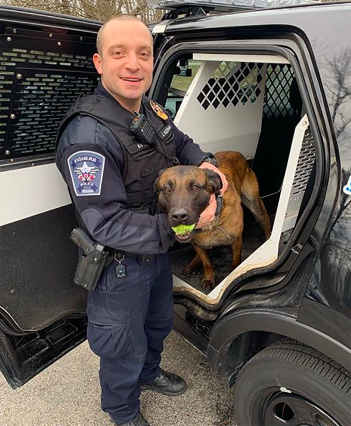 Harlej was a 5-year-old Belgian malinois K-9 with the Fishers Police Dept. He was killed Nov. 13, 2019 while tracking a suspect. (Submitted photo)

A gun Garrett dropped in the field where Harlej was shot connected the cases. Prior to killing Harlej, the trio had been on a shooting spree through Indianapolis that left two people dead — Devon Gillespie and Anthony Mack.

On Jan. 6, FPD and IMPD held a joint press conference in Fishers on the process and the importance of CGIC.

IMPD Assistant Chief Chris Bailey said in 2017, IMPD began changing the way it processed weapons. The guns are logged through the National Integrated Ballistic Information Network, which allows officers to use ballistic evidence to connect crimes. The CGIC began in January 2019.

“As a result of this project and Crime Gun Intelligence Center, that’s the reason we are here today discussing these three arrests,” Bailey said. “Had it not been for the improved process and tech, we would not have been able to make the connections to these cases and so many others across Marion County and Fishers in such a quick manner.”

Bailey said Farrow, Garrett and Hatcher were involved in 13 violent crimes in Indianapolis. The majority of the crimes were robberies and shootings.

“In addition to those incidents which occurred in Indianapolis and Marion County, they were involved in an incident in Fishers which took the life of a K-9 officer here,”  FPD Chief Ed Gebhart

“Internally, Fishers came onboard with this CGIC plan last March and we have submitted 84 crime guns since that endeavor, 84 guns that relate back to crime somehow,” Gebhart said. “Out of those, 56 of them in Fishers go back to violent crimes in the Indianapolis area, all the way to drive-by shootings, all the way to murders. In order to protect tomorrow, we have to act today.

“We believe this is where we need to spend our time, our resources and our money. Crime doesn’t know any borders and neither should law enforcement.”