You are at:Home»Current in Fishers»Fishers Cover Stories»Breaking a barrier: Students create menus for hearing-impaired and deaf communities

What began as a school project to help hearing-impaired and deaf communities is gaining traction at local restaurants.

Hamilton Southeastern High School juniors Yerin Kwon and Antonelle Johnson partnered for a school project mirroring the television series “Shark Tank,” where one of their teachers challenged them with finding a problem and making it into an opportunity. They created menus for the deaf and those with hearing impairments.

Johnson, who has two deaf parents, felt drawn to a project that benefits the deaf community. 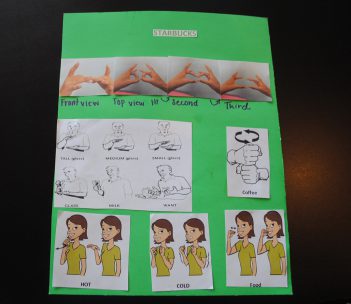 An example of the menus.

“Both my parents are deaf, and we would try to go order at Chick-fil-A or Starbucks and (the servers) don’t know (American Sign Language), and my mom would have to write down something, which frustrates the other customers because it is taking too long or it frustrates the staff,” Johnson said.

Johnson also said when a deaf person orders food and the items come out wrong, they may not ask for help because they feel like a burden.

“We are trying to make this a little bit easier for deaf and hard-of-hearing people to feel more connected and involved in the hearing world,” Johnson said. “We are trying to break that barrier. There is a barrier. If a deaf person walked in, (many) just wouldn’t know what to do.”

Kwon and Johnson developed menus detailing how to sign certain words to someone who’s deaf. They personalized the menus for the restaurants, such as Chick-fil-A or Starbucks, and added certain items to the prototype menus specific to those restaurants.

“It’s broad, but like (for Starbucks) there’s instructions for signing coffee,” Kwon said.

When the pair experienced difficulty getting in touch with the restaurants’ human resources division, they figured the project would stay at the school level. Then, they became connected with Pure Eatery, a local restaurant in Fishers.

Owner Courtney Andrus expressed interest in displaying the menus in the restaurant for servers to learn sign language. Kwon and Johnson provide a prototype menu including signs for taco, salad, sandwich and drink, which are all listed on Pure Eatery’s menu.

Instructions for how to sign the ABCs and numbers on the menus also will be included.

Andrus expects the menus to benefit Pure Eatery because the restaurant has a group of eight hearing-impaired or deaf guests who visit regularly.

The first time Andrus greeted a table with deaf guests, she said she wasn’t sure how to communicate.

“I find myself comfortable with guests, but even I was like, ‘If they wanted a modification, they weren’t going to ask me because that’s hard to do, especially with our menu where everything is so ingredient heavy. They pointed to the sandwich they wanted, but if they didn’t want lettuce, how do they tell me that?”

Some deaf guests write requests on a piece of paper, but Johnson said it can be frustrating and cause a feeling of disconnect with the hearing world.

Johnson also said that over-pronunciation of words or talking loudly is rude when communicating with a deaf person.

Johnson and Kwon are eager to assist other restaurants if interested. For more, email Kwon at yerin.k0212@gmail.com. 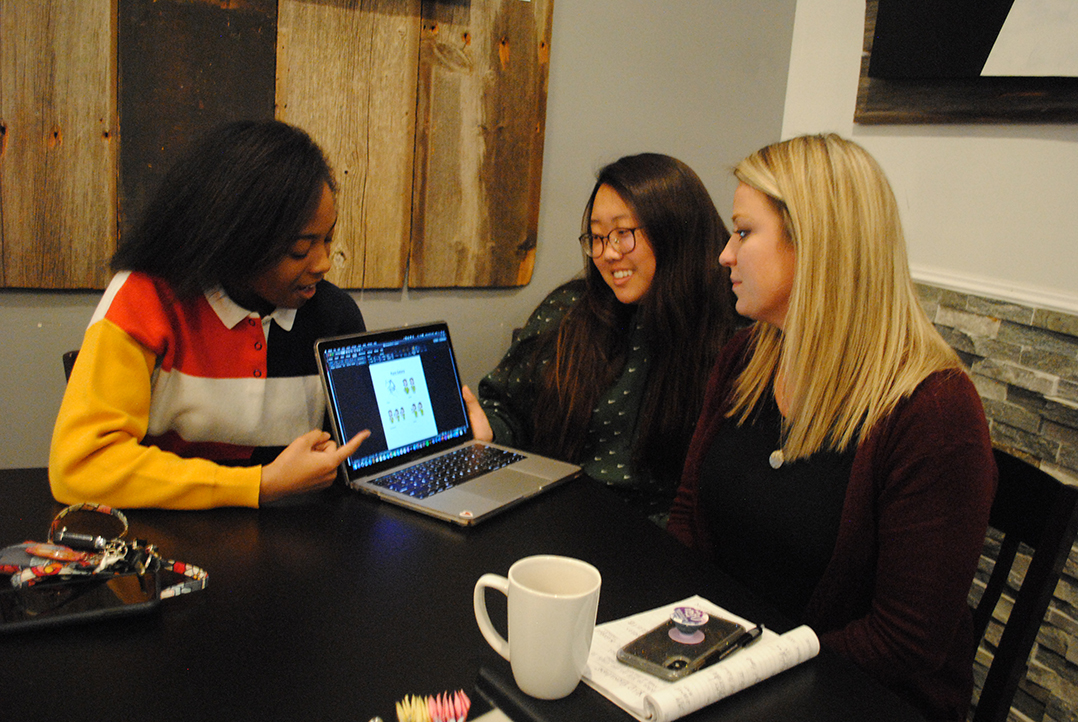 Hamilton Southeastern High School junior Antonelle Johnson partnered with fellow junior Yerin Kwon to create menus teaching basic sign language for restaurant servers to enhance communication with the deaf community. Pure Eatery, a restaurant in Fishers, is the first business on board, and Johnson said she the menus will benefit the business.

“I think they would have more deaf people come here because they have a signing service that would also help with business,” she said. “When someone starts signing back, they get really excited.”

“I think even just a few gestures would at least show we are making the effort, even if it is not a full conversation between the server and the guest,” Andrus said. “At least the server is welcoming them in a way they can understand, which might be helpful and make them feel better.”