You are at:Home»Current in Zionsville»Zionsville Cover Stories»Growing up and out: Winery adds additional location

Ron Hopwood, along with his wife, Janet, opened Hopwood Cellars Winery in the summer of 2012 after searching three years for a location in Zionsville. Now, after another arduous three-year search, Ron said he has found the next location to expand his business.

Boone County’s first and only winery, Hopwood Cellars acquired a 16-acre parcel of land at 2055 S. U.S. 421 where Ron said he will develop a vineyard, winery, distillery and event center to complement the winery’s Zionsville location.

“For Zionsville, I think it’s a great fit for the town and how it’s changing and growing,” Janet said. “It has a lot of possibilities.”

Ron said he has already applied for a distillery license and that he expects the vineyard to open in the summer and for the event center to be completed in 2021. The winery’s Zionsville location hosts approximately 20 events a month, he said, but with the new location, it will have more opportunities to host large events, especially weddings.

“We want to be a big player in the wedding business,” Ron said.

Ron estimates the total expenditure for acquiring the land, the building, construction and all other costs will be between $3 million and $4 million by the time the new location is finished. Although it will take up to five years to complete Ron, Janet and their two children, Sayge, 13, and Quinn, 11, welcome the challenge.

“I always tell people that once I plant those vines in the ground, the foundation is set, and Hopwood will live on for hundreds of years,” Ron said. “And that’s why I want (Sayge and Quinn) to be a part of it. Hopefully, they’ll take over. They’ll help take over down the road, but it’s all for them.

“Right now, we just have a store front. A store front can go away in a matter of six months, but once you set the foundation where you’ve grown vines into the ground, and these are 50 to 80-year-old vines that will stay in the ground for a very long time, the foundation, the legacy is now here, and you can’t take that away.”

Besides wanting to leave a legacy for his children, Ron said the Zionsville space, a downtown entertainment destination, presented undeniable evidence that change was needed. Sales, while steady, had leveled off three years after the winery opened. The wine is bottled and stored at the Zionsville location, and although the operation has become larger – the winery has distribution to Target, Marsh, Kroger and retailers – the limited location has led to boxes of wine being stored in the corner of the winery and employees forced to bottle the wine in tight, confined spaces.

But that will now change because the U.S. 421 location will have ample room for bottling and storage. The winery also will move much of its wine making to the new site, where staff can age, ferment and blend the wines in 1,300-gallon tanks instead of the 300-gallon tanks at the Zionsville location.

Ron said there are “5,000 grapes out there that make a great wine,” not just the same four sold in in stores.

“That’s all they seem to offer,” Ron said.

Hopwood Cellars Winery offers bottles that range from $14 to $56. 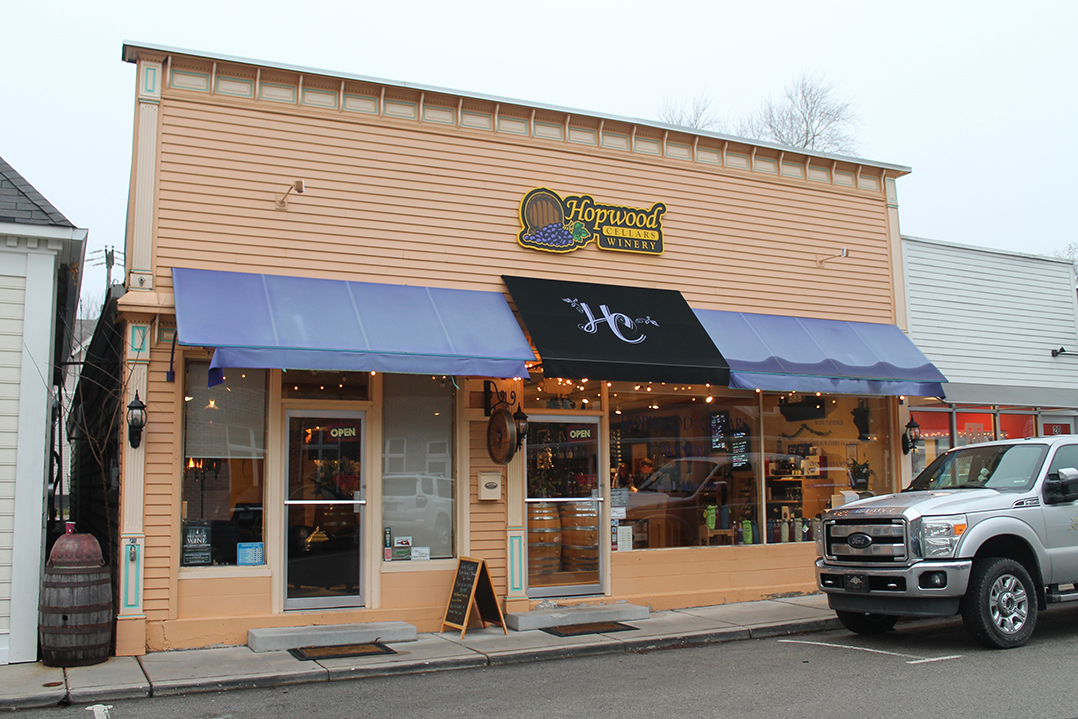 Ron and Janet Hopwood opened their winery’s Zionsville location in 2012. It will remain open during and after the winery’s new location is completed. (Photos by Jarred Meeks)

A passion for wine

Ron Hopwood has been making wines for more than 20 years, yet he seldom drank it until he began making it.

“I didn’t drink wine until the day I started making it,” Hopwood said. “I’d have a little bit here and there but didn’t really (drink) it.”

From that moment, he dedicated himself to what he calls a hobby. He has spent two decades mastering the craft of wine making. In time, he noticed a need in the local market for a more diverse wine selection and decided to turn his hobby into a business, Hopwood Cellars Winery.

“It’s his passion,” said his wife, Janet Hopwood. “It’s definitely been an endeavor.”

“People always say, ‘You have a lot of passion,’” Ron said. “But what I always say is, ‘Without persistence, passion is just a dream.’ My passion is being pushed, is being driven by a very strong persistence, and that is what keeps (Hopwood Cellars Winery) alive.”