You are at:Home»Current in Fishers»Fishers Cover Stories»Olympic opportunity: Fishers resident to travel to Tokyo to officiate open-water swimming

Fishers resident Matt Wilson is not be an Olympic athlete, but he’s nonetheless participating in the 2020 Summer Games in Tokyo in August.

Wilson will serve as an official for the Aug. 5-6 open-water swimming events. Swimmers will compete on a 10K, or roughly 6.2-mile, course in Tokyo Bay. Wilson will be a turn judge in one event to ensure swimmers round the buoy correctly and also to confirm each of the 25 competitors is accounted for.

In the other event, Wilson will work the finish area to ensure a proper order of finish.

Wilson has never been a swimmer, but became involved in the sport 22 years ago when his kids got involved.

Open-water swimming competitions are conducted in outdoor bodies of water, such as oceans, lakes and rivers.

“Our oldest kid had started swimming, and I didn’t want to spend the day sitting in the stands, so I learned how to become an official and that’s how I started,” Wilson said.

The Wilsons moved to Florida in 2005, and that’s when Wilson got involved in open-water officiating. The family returned to Fishers in October 2016, and though his children haven’t competed in swimming for six years, Wilson is still passionate about the sport. 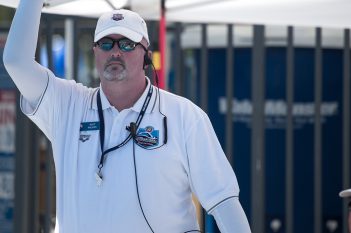 Matt Wilson officiates at a past event. (Photo by Mike Lewis)

“It’s primarily a way to give back to a sport that really helped our kids,” he said. “They really enjoyed it, and we really enjoy watching little ones learn the sport and the joy they have doing it, and we just enjoy giving back.”

Wilson traveled to his first national-level meet for pool swimming in 2008. Since then, he’s officiated several national pool swimming meets in the U.S. and participated in his first international open-water event in 2010.

Willson still officiates both types of swimming and recently returned from Knoxville, Tenn., where he officiated a pool swimming event.

“I like doing them both, and they’re completely different,” he said. “A lot of people that have done open water don’t necessarily like it because it’s too big an area to cover, and some people just like doing open water and don’t do pool events anymore, but I like the variety. I judge all four strokes in the pool across all ages.”

Due to an impressive resume in open-water swimming, Wilson was selected to attend the Olympics as an official for the open-water events.

“I’m one of nine officials in the U.S. on the FINA list (International Swimming Federation) international governing body for swimming for open water. You have to be on one of two lists to be eligible to go work international level events, and to get onto those lists you have to be nominated by your national governing body, in our case USA Swimming,” Wilson said. USA Swimming then nominates one official for an event like the Olympics, and FINA will take all those nominations from different nations and select five officials for the open-water events. The selection includes one official from the Americas, one from Europe, one from Asia, one from Oceania and one from Africa. Wilson was chosen from the North, Central and South Americas.

Wilson received word of his nomination in November.

“Even today, I am still a little just dumbstruck by the whole thing,” he said. “When I was told I had been nominated for it I was surprised.”

Wilson leaves for Tokyo Aug. 1 and will stay for a total of six days.

Fishers resident Matt Wilson will travel to the Tokyo Olympics in August to work as an open-water swimming official. He said there are several things swimmers have to be aware of in open-water events versus pool swimming, especially with regard to safety.

“(In open water), you have weather elements, nature elements, the water temperature or things in the water you have to be mindful of,” he said. “If you’re racing in the ocean, you may have jellyfish, you may have undertow current issues you have to deal with. We are always watching for the athletes, and that’s the big thing we impress on all the officials is making sure we have everyone accounted for.”