Westfield Mayor Andy Cook understands one way to continue for the city to be be attractive to residents is to ease the tax burden.

He said growing commercial businesses will provide a huge assist in that regard.

“We still have to work to do on this commercial end,” Cook said at his Jan. 16 State of the City address at the IMMI Conference Center in Westfield. “These announcements (of businesses coming to the city) are great. You look at our total tax assessed value pie and you compare our percent of commercial tax base to our total tax base, we’ve got a ways to go. I know our neighbors to the south (Carmel) have their debt and all that, but they do have something we desire, and that’s a tax rate for their schools that is lower than where we are now.

Cook said Carmel’s percentage of commercial tax base is 35 percent and Westfield’s is approximately 26 percent. 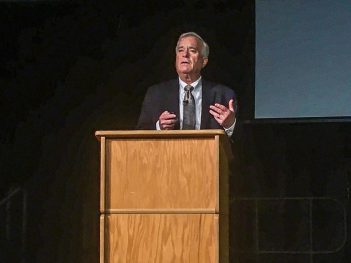 Mayor Andy Cook speaks during the State of the City. (Photo by Mark Ambrogi)

“We do need to continue this quest to bring in quality investment in the business of sports and more locations like NorthPoint,” Cook said of the mixed-use industrial and office development on the northern edge of Westfield. “We are an area where a lot of technical companies can hire. The problem is, right now NorthPoint only has one business open. With all the activity we have in the last three or four months, we’re almost out of space, so we need to be looking long and hard on growing our commercial tax base.”

Bastian Solutions was the first tenant to open at NorthPoint in April 2019. Gordon Food Service announced in October 2019 it was planning to build a distribution center at NorthPoint, which is expect to create hundreds of jobs.

Westfield has done a good job planning for the growth in the school district and the roadways, Cook said.

“We knew the growth was coming,” Cook said. “The (2008) Recession hit and it gave us time to sit back and develop a strategy. That strategy was not only working on a land-use plan, but working on a transportation plan, trying to anticipate the very population. You look at the study from 2007, that document projected the population in 2020 was going to be about 41,000 people. We think that is exactly where we are going to be. The whole challenge has been to develop a strategy, develop a story that keeps up and manage our gift of growth.”
Grand Park continues to succeed as well, exceeding 2 million visits per year, Cook said.

“If you take 2 million and $100 per person per day, that’s how much money in this community that wasn’t there six years ago,” Cook said. “The Hamilton County Tourism did a study on how many hotel rooms Grand Park is responsible for (filling). We’ve been talking about 100,000 (one-night stays) a year.”

According to a survey by Hamilton County Tourism, 547,500 one-night stays were sold in the central Indiana region in 2018 because of Grand Park. Westfield currently has 469 hotel rooms.

Westfield and Whitestown have been listed as the fastest-growing cities in Indiana in recent years. That would be a problem without advance planning, but Cook said Westfield has planned. He said so many cities have dried up population-wise because they haven’t been able to do the things as a community to attract younger residents. 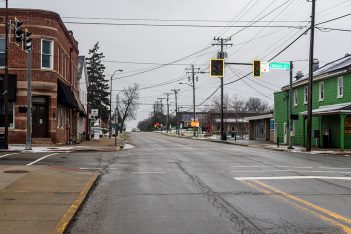 “We have to take things to the next level, and we need to be able to recruit people from outside Indiana,” Cook said. “How do you do that? You have to get the basics down, you have to pick up the snow, take care of the potholes and you have to pick up the trash. We have to plan ahead to deliver a quality place (to live). If you look at our road plan and transportation plan that was developed in 2007 and been updated, you’ll see many of the highway and intersection improvements we needed to make have already been done.”
Cook said there is a plan for the next few years for road improvements, including the Ind. 32 project.

“We’ve been able to stay up with the demands for public safety. This year, we’ll be adding 10 new officers.”

Cook said in the next three to five years, a fourth fire station will be needed, likely in the Grand Park area. That will mean adding 12 firefighters to staff the station. To begin to prepare, three new firefighters will be added this year

Mayor Andy Cook used his State of the City address to announce the launch of the Wellbeing Coalition of Westfield’s Wellbeing Index.

“This survey will give us the data to really step back and see what we, as a community, can do to help our residents of all ages live better lives,” stated Kyle Miller, Coalition volunteer and project lead. “The critical next step is getting our citizens to take 10 minutes and give us honest feedback.”

The survey, open to Westfield Washington Township residents ages 18 and older, can be taken through March 1.

The Wellbeing Coalition was launched a year ago.