“Don’t let it be forgot, that once there was a spot, for one brief shining moment that was known as …” Carmelot?

Not Camelot as lyricist Alan Jay Lerner famously wrote. Rather, Carmel Clay Historical Society director Debbie Gangstad wants residents to remember Carmelot playground, which she describes as a beloved public park with a medieval theme that derived its name from King Arthur’s Camelot. 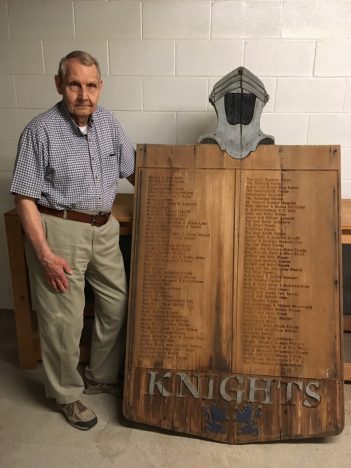 “There was a big ship and a castle at the other side of it,” Gangstad said. “It was wonderful, and kids loved it.”

“It was started by some PTO moms that were frustrated Carmel didn’t have its own playground,” Gangstad said. “At the time, we didn’t have a public playground. We had school playgrounds.”

Approximately 20 years later, Gangstad said the park was in disrepair because the wood started to deteriorate. Gray Road Park was built and the signs from Carmelot were removed. Courtney Schlaegal Weintraut, a Carmel Clay Parks & Recreation employee who played at Carmelot as a child, contacted the Carmel Clay Historical Society last year to inquire about CCHS’s interest in the signs.

The Barrington of Carmel volunteer woodworkers ,led by Will Elsner, Woody Hurst and Von Ballew and other volunteers, repaired the signs.

Gangstad said anyone with pictures or memories of the playground that residents would be willing to loan or share for the exhibit should contact the CCHS office at 317-846-7117 or email info@carmelclayhistory.org.