You are at:Home»Current in Carmel»Carmel Community»Guerin graduate to land with Indy Eleven

But the primary reason the 2016 Guerin Catholic High School graduate signed with Indy Eleven is its coach Martin Rennie. 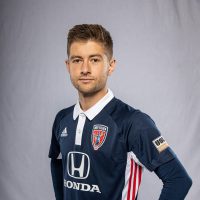 “I had a bunch of different options and (was) speaking to a lot of different teams, but I thought Martin’s philosophy was one that was the best for me,” Lindley said. “He saw the potential I had as a player but wanted to help me help me grow as well. That was a big factor in my decision.”

Lindley, a midfielder, has played against Indy Eleven twice while playing for Memphis 901 FC of USL Championship (part of United States League) in 2019. Indy Eleven opens the 2020 regular season March 7 at Memphis March.

“I trained in the offseason a few times with the team and got to be around him and talked to guys about him,” said Lindley, who said players said positive things about Rennie.

“I thought I was ready to go pro, and I’m glad I did,” said Lindley, who attended Carmel High School for two years before transferring to Guerin.

Lindley signed with Major League Soccer’s Orlando City in 2018 and played in three games that season. He played the 2019 season with Memphis, which has an affiliation with Orlando City. Orlando released Lindley following the 2019 season.

“I definitely want to get back to the MLS next year or the year after that,” Lindley said of his goals. “Here, it would be cool to bring a regular season championship and go into the playoffs and win another championship. I think it would be super cool be able to win a championship in your hometown and just get better as a player to do anything I need to do to get back in MLS.”

Lindley said the biggest thing he learned was how to approach the game as a professional.

“You have to wake up every day and enjoy the game but give everything you have the three, four, five hours you are there every day,” he said. “If you are able to do that, you’ll see yourself developing as a player and person.”

Lindley said he is hoping to play a lot of meaningful games for Indy Eleven.

“I think I’ll get on the field a lot, but this is such a good team that every game is a meaningful game,” he said. “The next progression in my career is playing in games that matter and showing I can get it done and teams will take notice.”

“The level in soccer between the MLS and USL isn’t that big, but there is definitely a difference,” he said.