Members of the recently revamped Green Action Club at Carmel High School wanted to create a movement to spread awareness about the benefits of composting. Three members attended a summer camp at Butler University and wanted to take what they learned back to the school.

“After the camp, we decided to build on this project,” said Grace Belt, a sophomore. “It’s one thing to say Carmel needs to reduce its emissions, but we wanted to find a way to make our school a little greener.” 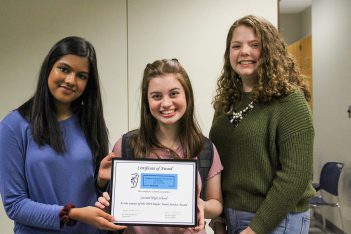 The trio began working with the school to compost food waste.

“We’re all passionate about the environment,” said Sarah Patel, a sophomore. “At first, we thought we would have the students involved in composting, but after research, we learned it was a better idea to have the kitchen staff participate. We thought it would reduce the number of errors.”

Food scraps are placed in bins lined with biodegradable bags. The containers are picked up at the end of the week by Heather Maybury, owner of Earth Mama Compost, and taken to Green Cycle, where it’s composted and sold to landscapers and gardeners.

“I got involved with CHS because it’s what I do,” Maybury said. “It is my goal to help anyone who wants to divert their food waste to the compost pile. Composting is one easy way that we can all have a direct impact on the environment.”

The direct impact includes eliminating methane gas composted items otherwise would have emitted in a landfill.

“We’ve received great feedback regarding the project,” said Maanya Rajesh, also a sophomore. “Currently, we’re only composting in the main cafeteria, but we would like to expand it to our freshman cafeteria and our smaller Greyhound Cafeteria. We think it’s a really good small change that can make a big difference.”