You are at:Home»Current in Noblesville»Noblesville Cover Stories»State of the City: Major project announcements come with Jensen’s first yearly address 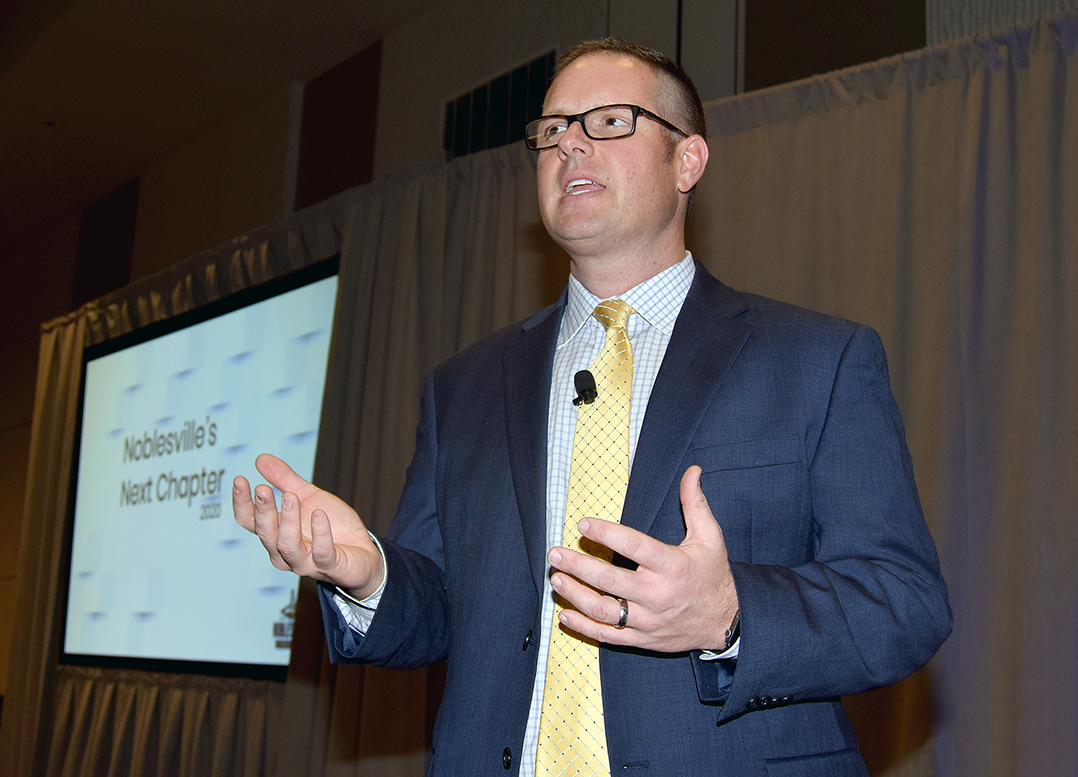 Noblesville Mayor Chris Jensen speaks to a crowd of approximately 500 at Embassy Suites Conference Center for his first State of the City address, an event hosted by the Noblesville Chamber of Commerce. (Submitted photo)

A record crowd of approximately 500 people filled the Ditslear Ballroom at Embassy Suites Feb. 27 for Mayor Chris Jensen’s first-ever State of the City address. The event marked the largest luncheon in Noblesville Chamber of Commerce history.

Since the start of his mayoral campaign, Jensen has identified four pillars as the focus of his administration: infrastructure, economic development, downtown and public health and safety. They were the main topics of his address.

“I’ve often said that if Indiana is indeed the Crossroads of America, then Hamilton County and Noblesville should be the crossroads of Indiana,” said Jensen said, referencing current and future infrastructure projects.

“We have talked about east-to-west connectivity in the City of Noblesville since 1987,” he said. “What was going on in 1987? Our city population was 17,000. Matt Cook, our city court judge, was valedictorian of his high school class. (I) was celebrating my third birthday. All that to say that we have talked about east-to-west traffic for far too long. We have studied it for a long time, and it is time for action. If we want our downtown to thrive, we have to make sure it’s accessible to folks. This is a priority for us. It’s long past due, and I’m excited to get to work.” 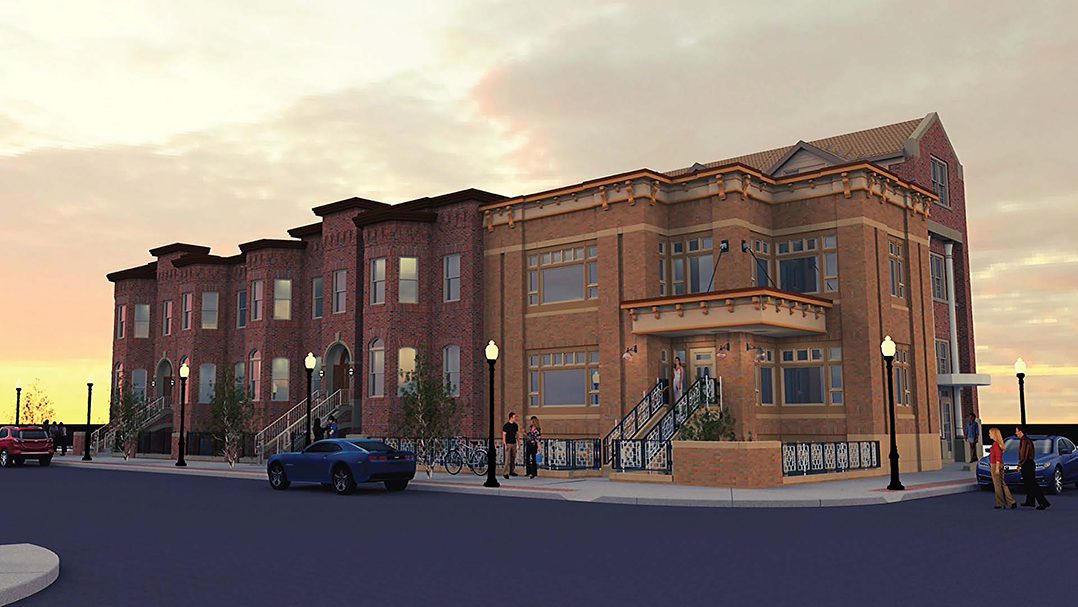 The Lofts on 10th will sit along 10th Street between Clinton and Wayne streets downtown. (Submitted rendering)

Jensen revisited the recent announcement of Panacea Medical moving its Indian headquarters to the city. The company will build a $12 million, 60,000-square-foot facility near BorgWarner on I-69. Panacea will bring 65 new jobs with an average wage of $80,000 annually.

Two major development announcements came out of this portion of Jensen’s address – a new residential development on 10th Street and a significant expansion of new development in the Federal Hill District.

Jensen also announced two major developments. The first announcement, an $8 million project from Darren and Monica Peck, is The Lofts on 10th Street. Two blocks from downtown, the project will add 31,700 square feet of mixed-use development between Clinton and Wayne streets. Approximately 8,000 square feet of the building will be used for commercial and retail space. 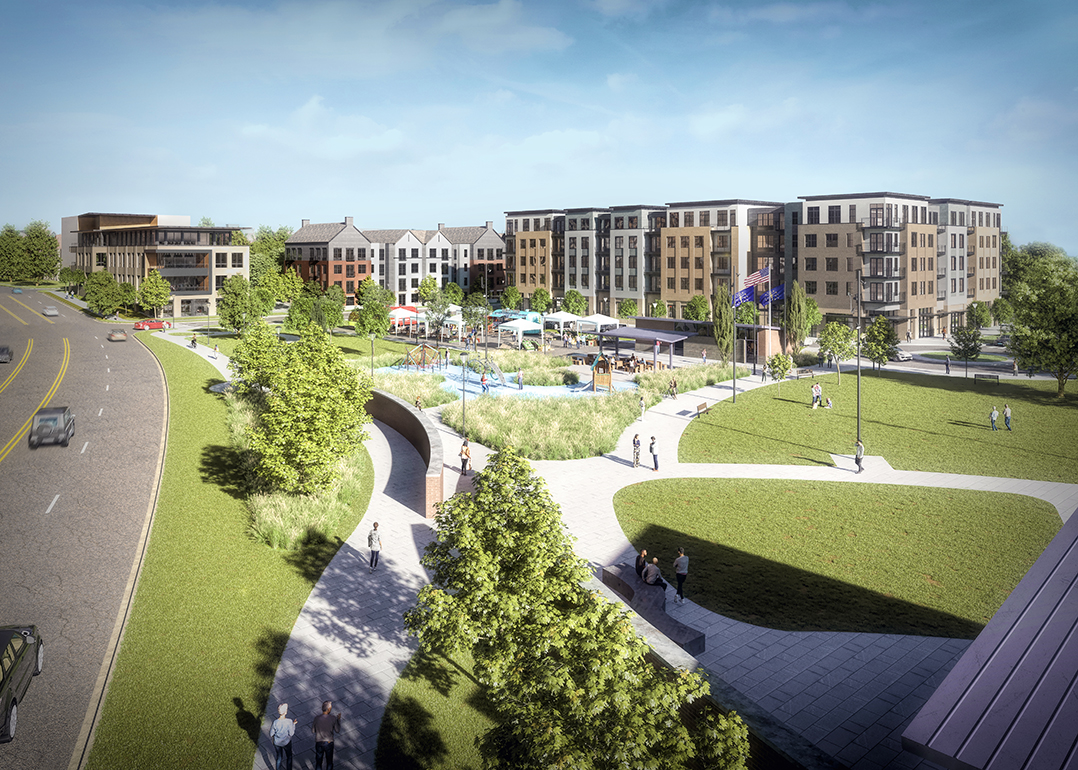 The Village at Federal Hill will develop a large section wrapping around the west and north sides of Federal Hill Commons, adding parking, retail and residential use. (Submitted rendering)

The next announcement was for The Village at Federal Hill.

“As you know, several years ago, the City of Noblesville invested millions of dollars into a floodplain development in Federal Hill,” Jensen said. “One of the things that we learned about that development is that area was in desperate need of some parking solutions as well as some retail and housing solutions.”

Located to the west and north of Federal Hill Commons between BlueSky and Kroger, the development by Old Town Design Group will sit on what is currently Federal Hill’s parking lot. Jensen said the project will include 163 residential units, 36,000 square feet of commercial and retail space and more than 400 parking spaces with a new garage and on-street and surface parking.

“It will help reduce a blighted area, increase revenue and use the site more effectively going forward,” Jensen said. “I’m excited that Old Town (Design Group) will partner with us on that and help us redevelop and reimagine that west side of the river and make it an even better commodity for our downtown going forward.”

Plans are in the works to invest $1.5 million to redevelop and rehabilitate Hobbs Station, an area inside Forest Park next to the train tracks. (Submitted rendering)

“When I knocked on doors this past spring, everyone talked about how Noblesville’s main attraction is our downtown,” Jensen said.

“(We want) to make sure they feel connected to our city and to make sure our city is working on behalf of them and the unique challenges that they face,” Jensen said.

Jensen also noted the work recently completed at Seminary Park, where nearly $500,000 was invested to build a new gazebo and install new landscaping, lighting and other features.

Jensen didn’t shy away from talking about the controversial train topic, announcing his plans to ask the city council for a $1.5 million to rehabilitate Hobbs Station, a historic train station at the former site of the Indiana Transportation Museum in Forest Park.

“Nickel Plate Express already has 130 excursions planned for 2020 with the potential to bring over 25,000 new, unique visitors into Forest Park,” Jensen said. “I think it’s time for us to ensure that the train stays in Noblesville in the future.”

“The first of its kind in Hamilton County, Chad’s job is large,” Jensen said. “He has to coordinate all the efforts not only of our police and fire departments inside City Hall, but (also) with the countless nonprofit and private-sector partners that we have all over the city who are committed to bettering the lives of Noblesville residents every single day.”

Jensen also announced a new paramedicine program, Noble Act, which will be launched later this month.

“The program is really a proactive approach to public safety,” Jensen said. “It brings together community, health care and public safety resources to identify and assist the public with nonemergency needs and health issues and strives to maintain a healthy community. It’s a multi-pronged approach, based on the community health assessment and data analysis, trending issues, stakeholder needs and citizen feedback.”

Noblesville Police Dept. officer Ben Lugar will lead the Noble Act program. Lugar recently served as a school resource officer at Noble Crossing Elementary. In his new role, he will train other officers in the paramedicine program. The city is partnering with Suburban North, Prevail, Shepherd’s Center and Aspire to begin the program.

“They’ll be focused on mental and behavioral health, addiction issues, age-related challenges and senior outreach as well as child safety services and the maternal health and well-being of pregnant women,” Jensen said. “This will help bring together the efforts of the Noblesville Fire Dept. and the Noblesville Police Dept.”

“So many people talked to us on the campaign trail and in the past 58 days about the importance of mental health in our community,” he said. “We’ve already been talking with Noblesville Schools and look forward in the coming months to roll out a citywide mental health initiative, with Noblesville Schools as our key partner, to start talking openly about the resources and the challenges those in the community face every day.”