A former radio and TV broadcaster, Ken Nelson views himself as a storyteller.

“What I’m doing now is no different,” he said.

The Geist-area resident has created a multipart series of videos to help pastors, church staff and Bible- and small-group leaders present the basic teachings of Jesus as written in Scripture. Nelson tells the stories with the visual backdrop of the Holy Land.

Nelson, 75, formed the idea after a Holy Land tour with his wife, Susie.

“What motivates me is we have over a thousand identifiable Christian denominations,” said Nelson, who was a field anchor at WRTV-6 in Indianapolis from 1978 to 1984 and later ran Ken Nelson Productions. “Christianity in America and around the world is losing members. Churches are closing by the hundreds. You hear about the megachurches that are growing but a lot of people are staying away from church.”

During their tour of Israel, Nelson and his wife visited the Western Wall, also known as Wailing Wall, in Jerusalem. As Nelson was standing there, he said he thought as a storyteller there has to be a simple way to relay the stories as Christ did.

“Jesus was not a complicated storyteller,” Nelson said. “He told a lot of simple parables and stories that made a lot of sense and were very profound. I thought as a storyteller and filmmaker there has to be a way to translate the simplicity of Christ into the basics of Christianity.”

Nelson originally envisioned one video to distribute to churches, so he put a video on his cellphone and showed it to some church audiences to get feedback. He was encouraged to make it a series, and it has now grown to 10 videos. The website, basicchristianityvideo.org, will be available for streaming live or downloaded for future use as a whole series April 12, Easter Sunday.

There is a leadership and discussion guide for each video.

“We stick to this principle that if it’s not in the Bible, we don’t address it,” Nelson said. “If it’s what Christ said and did, we talk about it. It’s nondenominational.” 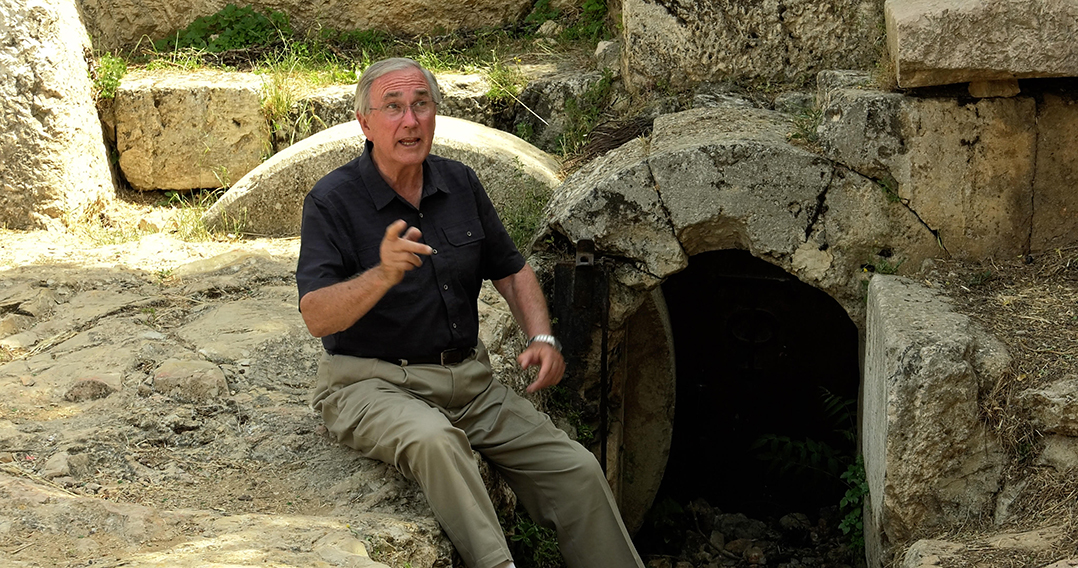 Ken Nelson records a video at the traditional burial site of Jesus.

“We go to 45 places in the Holy Land,” Nelson said. “For instance, we go to Lazarus’ tomb and say this is where Jesus brought Lazarus back to life. So, what happens is the Bible becomes a living story to them. It’s not just words on a page.”

Nelson has been to the Holy Land nine times in the past two years. He befriended a family of Palestinian Christians, whose leader, Fadi Zoughbl, founded the Church of The House of Bread in Bethlehem. When Nelson visits Israel, he stays with them and helps their ministry, and Zoughbl has helped with the series.

Nelson operates the camera, edits and writes the script.

“All the things I’ve done in life has prepared me to do this,” he said. “If I had a whole production crew over there, I could never do this with the cost I’m doing. I do a lot of photography myself. I’ve hired people to go with me when I’m on camera.”

Technology gives him the ability to update and refresh the videos.

Despite his busy schedule, Faust said he had to accept Nelson’s request to help with the videos.

“How can any minister of the Gospel refuse an opportunity to go to Israel and teach about the life of Jesus?” Faust said. “I think Ken has done a a terrific job. Ken is a great storyteller. He has a good way of asking the question the viewer of the video would want to ask. You can tell he has years of experience at it.”

“We’ve spent thousands of dollars on it,” he said. “Susie questioned at times the wisdom of all of this but now she understands it and I have her blessing to do this.”

Nelson’s ministries have accepted donations to help defray all expenses.

“I’ve had people asking me if we can have it translated into different languages,” he said. “I think this is going to explode in use around the world. We think the demand for this is going to be overwhelming.” 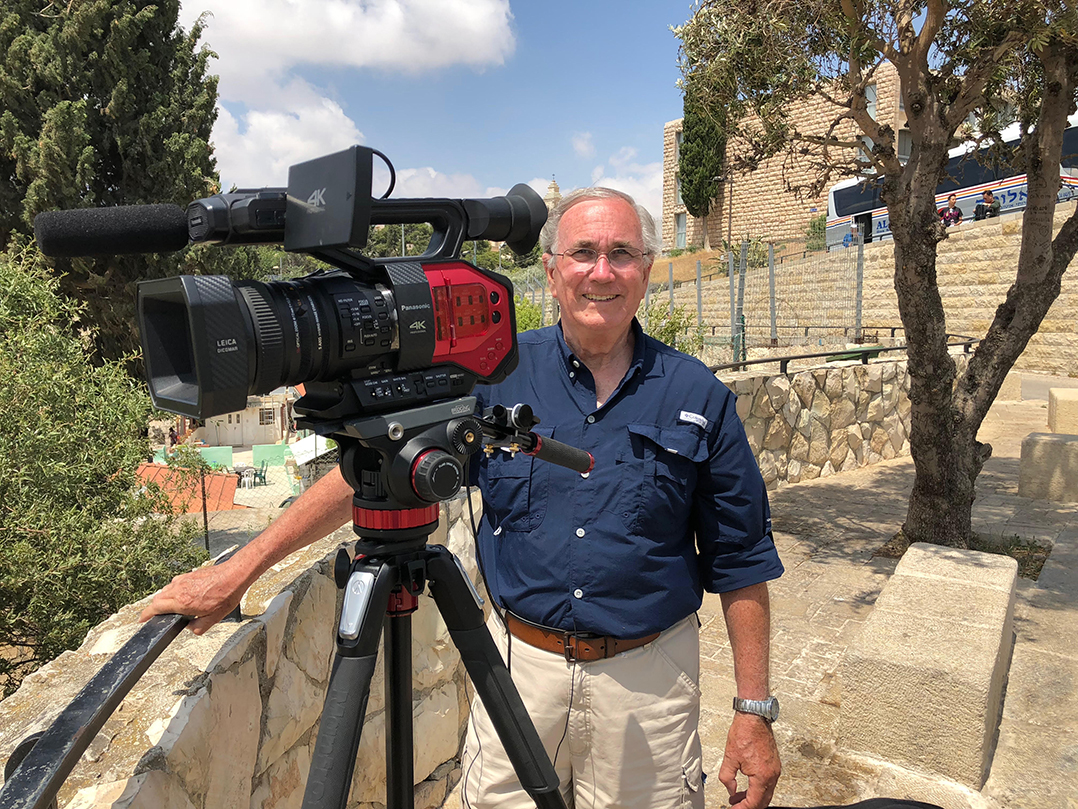 Ken Nelson records a video at the Mount of Olives.

Ken Nelson’s son Jeffrey, a Westfield resident, is a pilot for United Airlines, so Nelson has been able to fly for free to Israel if a seat is available. His daughter, Amy, a Fishers resident, is an executive with the Make-A-Wish Foundation. Another son, Bradley, an Indianapolis resident, is an ordained minister.