Showcasing her raku pottery at the 10th annual Indiana Artisan Marketplace in early April would have been a first for Fishers artisan Christine Davis. But, with the event canceled due to the COVID-19 pandemic, Davis can only reflect on the honor of being selected. 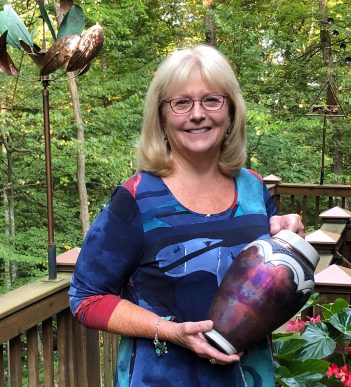 “The Indiana Artisans are a group of acclaimed artists,” Davis said. “I am pleased to be in their midst.”

Approximately 140 artists were slated to participate, with 25 scheduled to demonstrate their crafts in their booths.

Davis has worked in the art world since she was a student at Indiana University. She started in high-fire ceramics and now focuses on raku pottery, a technique that originated in Japan.

“I worked in stain glass for many years, but when I took Loran Hill’s raku class at the Indianapolis Art Center 20 years ago, I was immediately hooked on raku,” she said.

Raku is an “unpredictable and uncontrollable process” of glaze firing. Pieces reach a temperature 1,900 degrees Fahrenheit in an hour.

“At that temperature, the top of the kiln is raised, and pieces are taken from the kiln. They are placed in smaller containers filled with combustibles which ignite,” Davis said. “As flames climb up the piece, colors change in the glaze and smoke is absorbed into unglazed areas and become black. This produces one-of-a-kind pieces.”

Each piece can take several weeks to create.

“The art of pottery is a drawn-out process of many steps, then hours of drying and firing,” Davis said. “I normally have pieces in all stages of the process.”

Davis creates the pottery at her home studio.

“After many years of making do with a porch as my studio, when we built our log home in Fishers 11 years ago I was able to have the studio of my dreams,” she said.

When it comes to her work, Davis likes to push the limits.

“It would be very easy for me to dip a piece in glaze and fire it, but the possibilities of raku make me push the envelope,” she said. “I use multiple glazers, textures and intricate designs in my pieces.”

The inspiration for her work is her brother, Jeff.

“Jeff was a very creative painter in college. As a Marine, he was killed in the Vietnam War,” Davis said. “I like to think that I continued on for him in the art world. I hope that people can feel my passion for raku and wonder at its results.”