You are at:Home»Current in Carmel»Carmel Community»Holcomb hopes to open economy in early May.

Indiana Gov. Eric Holcomb and governors from surrounding states announced they would coordinate to reopen their economies as soon as the start of May. 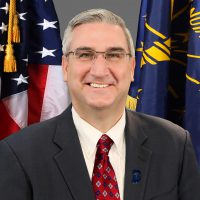 On Monday, governors from California, Oregon and Washington announced they would work in conjunction to reopen the west coast’s economy together, and seven states from the nation’s northeast corridor announced plans to do the same for their region as well.

Holcomb said the states have worked together to keep each other informed of their progress and have been in regular contact with President Donald Trump and his teams during the pandemic.

Dewine said he plans to open Ohio’s government starting May 1, but Holcomb said during a press conference that he was hesitant to give an exact date for when Indiana’s economy will open. He did, however, say the state was targeting a date in early May.

“We didn’t arrive here overnight, and we won’t get out of the woods overnight,” Holcomb said during the press conference.

Holcomb said the state would take a regional approach to opening its economy should current trends hold in the coming days and weeks.

The state will examine four factors when determining when best to reopen our economy, according to the governor’s office.

It will look for sustained control of the rate of new COVID-19 infections and hospitalizations; enhanced ability to test for and trace the disease; sufficient healthcare capacity to handle any resurgence; and best practices for social distancing in the workplace.

The Indiana State Dept. of Health today announced that 611 additional Indiana residents have been diagnosed with COVID-19, the disease stemming from the new coronavirus, bringing to 9,542 the total number of Indiana residents known to have the virus following corrections to yesterday’s total.

Though more Indiana residents continue to die from the disease, Indiana State Health Commissioner Dr. Kristina Box said the state’s testing capacity has increased, hospitalizations remain steady and ICU beds and ventilators continue to be available in large quantities. She said at a previous press conference she is “cautiously optimistic” the state’s southeast region has seen its peak in active COVID-19 patients. She also said epidemiological models suggest Marion County will see its peak by the last week of April and the rest of the state by the beginning of May.

During the press conference, Holcomb said he wrote a letter that was sent to representatives of various businesses and restaurants throughout the state, asking for their feedback on how to best reopen the economy in a way that is safe and appropriate for their business. He said responses are due to him by Wednesday. He hopes to use their feedback to better inform the state’s move to reopen its economy.