Koopman is one of four K-9 officers with the department.

Harlej was fatally shot while tracking a suspect in November 2019.

“When all that happened, I took it pretty hard,” Koopman said. “I told people it has been nice I took time away. He died in November, and it probably wasn’t until mid-January I decided I would go back and do training again with a new K-9. Through that month and a half, I still had the desire and passion to work dogs and be a K-9 handler again.” 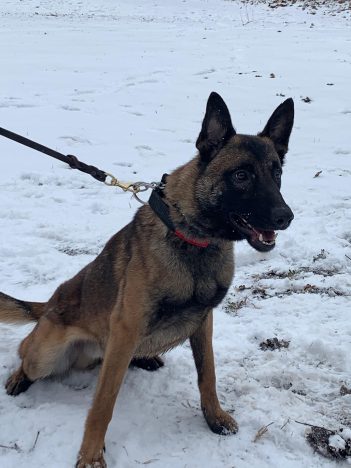 Rico is a 14-month-old Belgian Malinois.

Koopman said the FPD has been supportive throughout the process. Ultimately, it was his decision to return to K-9 work.

“I was excited to get back into K-9 and going to get another K-9 partner. Selecting Rico, it felt like I was being selected as a handler again,” Koopman said. “I had all that excitement of getting a new dog and putting the work in. K-9 is a lot of work behind the scenes, and I was excited for it.”

Koopman conducted his training at Von Liche Kennels in Denver, Ind., in late January. When he trained with Harlej, he went through the basic six-week handler course, but this time, Koopman went through a nine-week trainer course so he could be certified as a K-9 trainer. When he started in late January, he began training four dogs, including Rico.

“I knew I was going to select my next K-9 partner, and they have anywhere from 200 dogs in the kennel at a time,” Koopman said. “I went up there and they said, ‘Whatever dog you want, let us know and that’s your dog.’ Rico kept standing out. he was catching on really quick to things that I had. When you’re picking a new dog, you look at what’s their starting foundation and what you can potentially build on. That’s the biggest thing.

“You look at how good they are right now and what they could potentially be.”

Koopman and Rico graduated from training March 27. They have patrolled together for three weeks, but Koopman said Rico hasn’t had a chance to show what he’s made of yet. 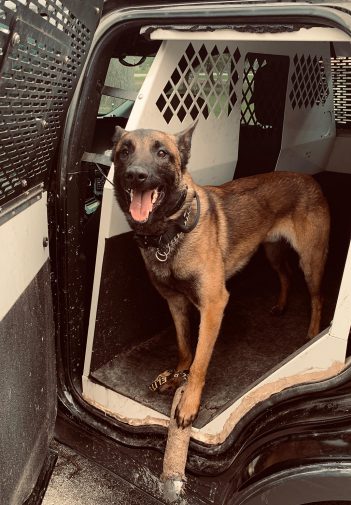 Rico is a 14-month-old Belgian Malinois.

“We’ve been slow with the whole COVID-19 stuff, but the good thing is we’ve been training,” Koopman said. “Because we are not able to train as a group like we normally would, it’s been so slow on the streets that a lot of it right now is still training. That’s not a bad thing because I get to speed up his training. Von Liche is like going through the police academy. You learn basic stuff to be a K-9 and working as a team. Everything else when you get back home is building on that training.”

STANLEY Security and Sagamore Concrete Co. donated funds for FPD to purchase Rico. A police K-9 can cost up to $15,000.

Koopman was hired by FPD in 2011. Harlej was his first K-9 partner and was 5 years old when he was killed.

Having Rico at home 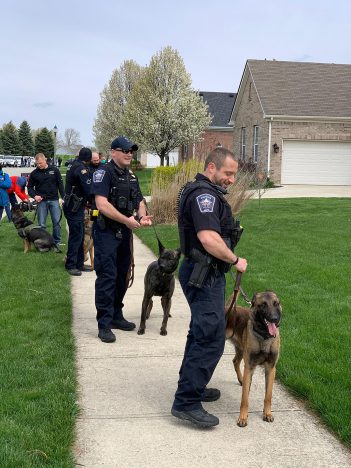 Fishers Police Dept. officer Jarred Koopman said his wife Kim and two sons, Cannon and Rowan, have adjusted well to having a new K-9 in the home. Koopman also has a personal dog, a boxer named Jaxon, and a cat named Walter.

“Rico actually stays outside, which is part of our department policy,” Koopman said. “He requires an outdoor kennel, with a little room attached to it that’s insulated and they stay out there. (My family has) adjusted pretty well. Especially for the boys, I think they were just excited to see another dog again. You appreciate the process more with a second dog.

“Obviously, with what happened with Harlej, my wife and boys and I are appreciating this process more than what we did because of the potential of what possibly could happen.”