You are at:Home»Current in Noblesville»Noblesville Cover Stories»Beating the odds: 91-year-old war veteran released from hospital after battle with COVID-19

In mid-March, Noblesville resident Gerald Hyndman bid farewell to his family. The 91-year-old veteran was in the hospital, near death with COVID-19, and wasn’t expected to live. But a few weeks later, to the collective relief of his family and caregivers, the survivor of World War II and the Korean and Vietnam wars also survived the new coronavirus.

He was released from Riverview Hospital on April 10 and celebrated Easter with his family — the happy ending of a frightening ordeal that began March 14. 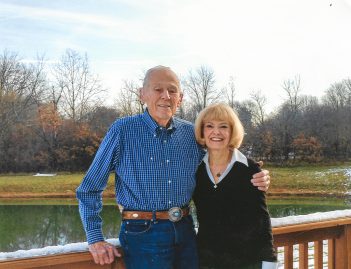 “It started with a sniffle, and at that time, I thought, ‘This can’t be that crazy virus.’ It just wasn’t huge yet,” said Grace Sell, Hydnman’s daughter. “As the week went on, he got sicker and sicker, but it could be all kinds of things at 91. That Friday he had a high fever and coughing, and doctors said, ‘If he develops a shortness of breath, that’s when it’s time to go to the ER.’ Saturday morning, he was having shortness of breath, so we called the Riverview ER and gave them a heads up and took Dad over.

“We did the COVID test and never in a million years expected that would be it.”

When the family received the COVID-19 diagnosis, Sell said it was devastating. Hyndman’s condition continued to worsen and he was moved to the ICU.

Hyndman continued to improve and was moved out of the ICU and taken off antibiotics. He was never on a ventilator. He was then weaned off oxygen until he was breathing on his own.

“I’ve got to say, the staff at Riverview Hospital were incredible,” she said. “The awful thing about this virus is it cuts you off from your loved one. We wanted to be by Dad’s side and we couldn’t, but these people were. One of the nurses told me she cared for him like he was her own father.”

Hyndman continues to recover in the presence of his family. Easter was an extra special occasion. 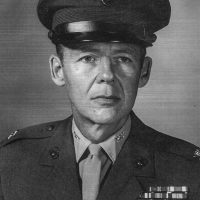 “Dad came home and spent the weekend with us all and celebrated Easter,” Sell said. “He gets stronger every day. He’s just an incredible guy. He’s the patriarch, so he sat at the head of the table and we had a joyous holiday together. We are a Christian family and had a lot of people praying for us. He came home on Good Friday, so for us, that was just another miracle.”

Hyndman didn’t see action in World War II but served several tours of duty in Korea and Vietnam, where he was an amphibious warfare expert.

“He’s kind of a cool guy,” Sell said. “He got two master’s degrees and volunteered heavily his whole life through his church and is adored by family. He’s the kind of guy who donated gallons and gallons of blood. He’s super into community service and helping all of us as well.”

Hyndman, who is still recovering, was unable for an interview.

The road to recovery 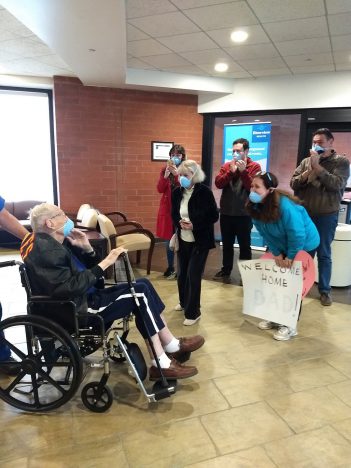 Gerald Hyndman’s family welcomes him after he was released from the hospital.

Although 91-year-old war veteran Gerald Hyndman was diagnosed with COVID-19 in mid-March, his wife, Joan, 87, never contracted it.
“Nobody else got it,” Hyndman’s daughter Grace Sell said. “That’s another thing we are incredibly grateful for.”

The family is still taking extensive measures to protect Gerald and Joan from the virus.

“He’s tough as nails,” Sell said. “He’s back to himself. He just needs to get strong again and be protected.”