You are at:Home»Current in Carmel»Carmel Community»Dillinger touts experience in reelection bid

Hamilton County Commissioner Steve Dillinger already has the distinction of being the county’s longest-serving commissioner. As evidenced by his reelection bid, he wants to serve even longer. 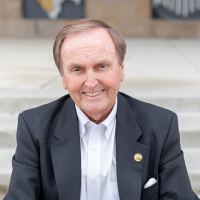 “We have a lot of unfinished large projects, and we have a good team,” Dillinger said. “Very honestly, most commissioner teams in the state don’t operate well together. With Mark (Heirbrandt) and Christine (Altman) and I, we don’t always agree, but I think we get along very well.”

Among the county’s long list of infrastructure projects, Dillinger said the partnership between the county, City of Noblesville and City of Fishers to complete the Ind. 37 thoroughfare is perhaps the most important.

“It’s a very unique project because that’s a state road. They allowed us to take over the project so we could design it more like Keystone Avenue rather than U.S. 31,” Dillinger said. “The U.S. 31 project kind of cut off all the businesses. It’s great to drive on but it didn’t do much for the businesses along that thoroughfare or keeping the community together. We didn’t want that to happen with Ind. 37.

“We’re tying the communities together while also giving people the ability to get on Ind. 37 and not have to stop.”
During Dillinger’s time as a commissioner, the county’s population has grown from approximately 82,000 to about 340,000. At the end of 2019, Dillinger was named an Outstanding County Commissioner by the Indiana Association of County Commissioners.

He is the founder and owner of S.C. Dillinger & Associates, an insurance financial planning agency. He said he is semi-retired from the business. He is married to Renee and has two children, three stepchildren, five grandchildren and 12 great-grandchildren.

“The key to my success is not me, it truly isn’t,” Dillinger said. “We have outstanding department heads and employees that are committed to doing things right. We’re the CEOs of a $150 million operation with 800 to 1,000 employees and 340,000 clients. I think people need to be commissioners when they have the background or experience to manage it.”

Learn more about Dillinger and his campaign by visiting stevedillinger.com.