You are at:Home»Current in Carmel»Carmel Community»McMillan seeks 1st elected office

McMillan, who has lived most of his life in Noblesville and is a 1981 Noblesville High School graduate, is running for an elected office for the first time. He is running as a Republican for Hamilton County Commissioner District 2 against Steve Dillinger, who has served since 1989. The primary is June 2. 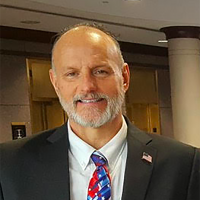 “I feel like the commissioners overall have done a great job, but I feel it’s time for some new energy,” McMillan said. “Dillinger even admitted on a video that they have been trying to get an east/west bypass over the river in Noblesville to alleviate the traffic issues that have been here since 1979. He had 10 years with the city before moving over to the county, so he’s had 40 years to get this done. They don’t even have it narrowed down yet. The city has bought property along the Pleasant Street corridor but they don’t know if that is going to be feasible. It’s still up in the air. I don’t know what he could get done in the next four years that he was not able to get done in the last 40. My motivation is to get things done. I want four years. If I do a good job, maybe another four.

“One promise I can make is I guarantee I will not be there for 40 years.”

McMillan said the east/west bypass should have been completed before the Ind. 37 project.

“When that gets going near Noblesville, there are going to be some issues as far as traffic and gridlock,” he said.

McMillan said the biggest thing he hears from voters is that Dillinger has been in office too long.

McMillan, who works as master automotive technician for his family owned McMillan Auto Care & Towing in Noblesville, is the chairman of the Hamilton County Board of Zoning Appeals, South District.