To serve parents who are ready to send their kids into the world and those moms and dads that are still a little cautious, Christian Youth Theater is offering virtual and in-person camp opportunities this summer.

“We’re hearing two distinct messages, ‘We’re keeping our kids home from camp this summer’ and ‘We wouldn’t miss sending our kids to your camp for the world,’ so this is our way of bridging that gap,” CYT Executive Director Laura Baltz stated. 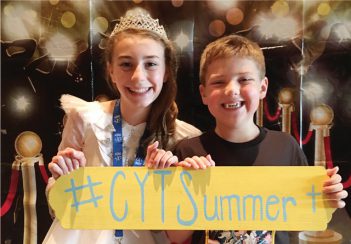 In-person camps are scheduled during July and feature Camp Hakuna Mata and Under the Sea themes, as well as a teen camp that auditions, rehearses and performs “Seussical Jr.” in only a week.

Although in-person camps still include singing, dancing and acting, they will look different than previous summer camps.

“Numbers will be smaller, and we will follow all CDC guidelines to protect the health of our kids,” Camp Director Levi Burke stated.

In addition, campers can make an in-person appointment to audition for a fake musical in front of real directors and receive feedback. Campers wanting to submit a video and not perform in person can do so. The summer culminates in a scavenger hunt, where families will load into their cars and travel across Hamilton County searching for clues and competing for prizes.

Students between the ages of 4 and 6 can participate in virtual storytelling and show their skills with theater-themed crafts from their chosen device.

July 20 24 at Crossroads Church at Westfield, Under the Sea Camp.