You are at:Home»Current in Zionsville»Zionsville Cover Stories»24/7: Inside the IEDC’s race to secure PPE for the state

In mid-March, state officials retooled agencies to respond to the COVID-19 pandemic. On March 20, the Indiana Economic Development Corp. was tasked with procuring as much personal protective equipment, or PPE, as possible.

After the initial outbreak of COVID-19 in Wuhan, China, the world watched as PPE – respirator masks, gowns, face shields and other items – became scarce. Shipments from the world’s largest supplier, China, stagnated, and the U.S.’s national stockpile was depleted in the first weeks of the pandemic, leaving state governments scrambling to supply their hospital systems and health care workers with PPE.

“When the pandemic began, the IEDC, because of our relationship with the private sector, and based on some calls we were getting and people we were working with, the governor’s office had asked us to take the lead on dealing with private-sector companies that wanted to help out during COVID-19,” said, Luke Bosso, the IEDC’s chief of staff.

Since March 20, Bosso, 35, an Indianapolis resident, has driven to his office, even though many municipalities and businesses were, or still are, temporarily closed. He still wears a suit, but for comfort, he has traded his dress shoes for a pair of Allbirds and ditched ties because, he said, “Ties carry germs.”

Bosso arrives at his office about 10 minutes earlier than pre-pandemic days because traffic has thinned. His phone begins to ring each day at about 7:45 a.m., which reminds him how many people acquired his cell phone number during the pandemic.

“The phone never stops ringing,” Bosso said. “The emails never stop. It’s amazing how many people are emailing about this.”

Within the first handful of phone calls he made in March, Bosso said he realized the IEDC’s role during the crisis would have to change.

“It became clear that while it was probably more important for the health department and the Dept. of Homeland Security to worry more about the crisis (and) worry more about the operations than it was for them to start vetting companies and whether or not they were able to provide good PPE,” Bosso.

In March, the IEDC tasked employees with vetting potential vendors of PPE. It has since established a multitiered system to secure PPE as fast as possible while also verifying the integrity of the vendors it orders from.

The process begins with phone calls. If the corporation feels confidant the vendor is a legitimate source, other calls are scheduled to start the procurement processes.

“Usually, I come in during the end of the second or third call,” Bosso said. “I’ll deal with a business or a person and execute the order based on feedback we’ve heard.”

Bosso often texts the IEDC’s chief administrative officer, Robert Paglia, 44, who now wears a uniform of revolving T-shirts and sweatpants as he works from his home in Marion County. Paglia is one of many other IEDC officials who work in the multitiered system.

Paglia helps vet companies with Bosso while managing schedules and finances. He also has helped develop a template of questions for other employees to ask vendors during initial calls and tracks the corporation’s overall procurement activity.

“Most of the folks that we’re interacting with are not typical vendors of the state, certainly not of the IEDC,” Paglia said, noting that the IEDC has worked with the state auditor to expedite vendors setting up within 24 hours.

Bosso said he contacts vendors on an almost daily basis to keep up with the demand. If he’s notified of a shipment of 4,000 protective gowns that are ready to be delivered, he immediately contacts the vendor to see if 4,000 more can be ordered.

“You want to talk to the people you’re buying from,” Bosso said. “I tell people all the time (that) a thing I’ve learned during this is, if a deal was bad before COVID-19, then it’s bad now. Unless you’re talking directly to a manufacturer and getting some type of assurance that it’s a real deal, then you don’t know that it’s not some type of scam, that you actually are buying from the factory.”

Of particular concern are N95 respirator masks worn by front-line health care workers. The masks must protect wearers from at least 95 percent of airborn particles. Bosso and Paglia said N95 masks are the most frequently counterfeited items of PPE and require the most vetting.

“Particularly if it’s something coming internationally, we have had a lot of samples sent to us, and I would say, more times than not, the samples that we get are not sufficient for what our needs are,” Paglia said.

Because a number of PPE items are procured from foreign nations, such as China, the IEDC has designated employees to work overnight shifts to communicate with nations in other time zones, creating what Bosso and Paglia call “an all-hands-on-deck” response that often requires them to be available virtually any hour of the day.

As of May 22, the IEDC had received more than 14 million PPE items from the private sector. In total, it had commitments for more than 18 million items. 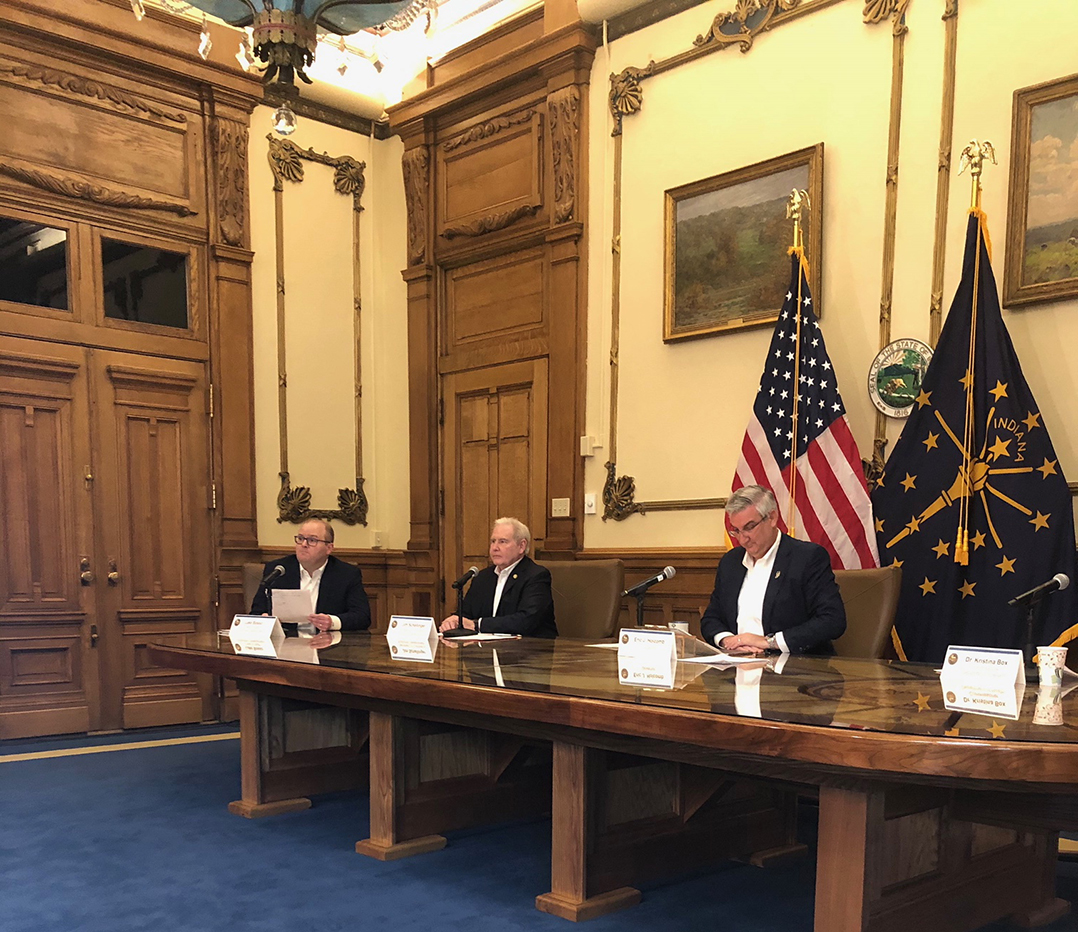 On May 6, the state launched the Indiana Small Business PPE Marketplace, an online resource for Indiana small businesses employing up to 150 employees in need of personal protective equipment, or PPE, during the pandemic.

The marketplace is backed by the Indiana Economic Development Corp. The service was designed to serve as a backstop for employers who can’t find PPE from traditional sources.

On May 22, Luke Bosso, the IEDC chief of staff, said that more than 20,000 bundles of PPE had been shipped to Indiana businesses through the marketplace. This month, Bosso said 70,000 bundles of PPE will be shipped to businesses throughout the state. Bundles vary based on a business’ number of employees and specific needs. The most masks offered in a bundle are 150. Bundle options can be found at backontrack.in.gov/ppemarketplace.htm.

Bosso said the marketplace was created to ensure Indiana businesses can reopen with the proper PPE to protect employees and customers.

“It was real simple,” Esra said. “It wasn’t very substantial, but I understand they can’t supply everything to everyone. We went through it fairly quickly.”

As of press time, the marketplace was free for businesses that qualify, but that is subject to change, according to the IEDC.

“Any of the PPE we don’t have to pay for is better,” Esra said.