An announcement during Noblesville’s State of the City in February recently came to fruition. NobleAct, a mental health crisis and substance abuse response program, was formerly announced in mid-April. The program will utilize mental health police officers, community paramedics and mental health clinicians to provide linkage to community services and divert those in crisis from the criminal justice system.

“We announced it in February at the State of the City, and it formed out of a lot of conversations during the transition time last year,” Mayor Chris Jensen said. “The idea of paramedicine kept coming up. It’s really a concept around being proactive in the approach to public safety. It’s using community data. It’s using different programs that take a look at high-risk individuals.”

The NobleAct paramedicine program could benefit seniors who are more likely to fall in their homes, and it also could benefit those who struggle with substance abuse and the mental health crisis.

“He’s helping us launch this program, and he will be (on) the front lines on this with targeting specific needs within the community to get in front of (the goals),” Jensen said. “We also promoted three firefighters to community paramedics. They are going to work in conjunction with Ben Lugar to help develop the program to identify high-risk individuals.”

Lugar said the COVID-19 pandemic was an appropriate time to launch the NobleAct program and discuss the importance of mental health. NobleAct officers can’t transport patients to a hospital but they will often be the first ones on the scene to assess the situation.

“It’ll have several different components, depending on which officer is taking the lead,” Lugar said. “On the fire department side, I know they’ll be doing a lot of things common amongst community paramedicine programs, like checking on fall risks and elder cares and reduce repeat hospitalizations of citizens. They also can be focusing on individuals who have mental health or substance abuse issues that are regularly utilizing first responders or coming into contact with first responders quite often and direct them to more appropriate community resources.

“To do that, we will be both actively responding to 911 crises and, along with the police and fire department, help direct that individual to that appropriate level of care with the goal if they don’t need to be hospitalized but need connection to outpatient services, we want to be able to provide that there on-scene and also conduct follow-up services.” 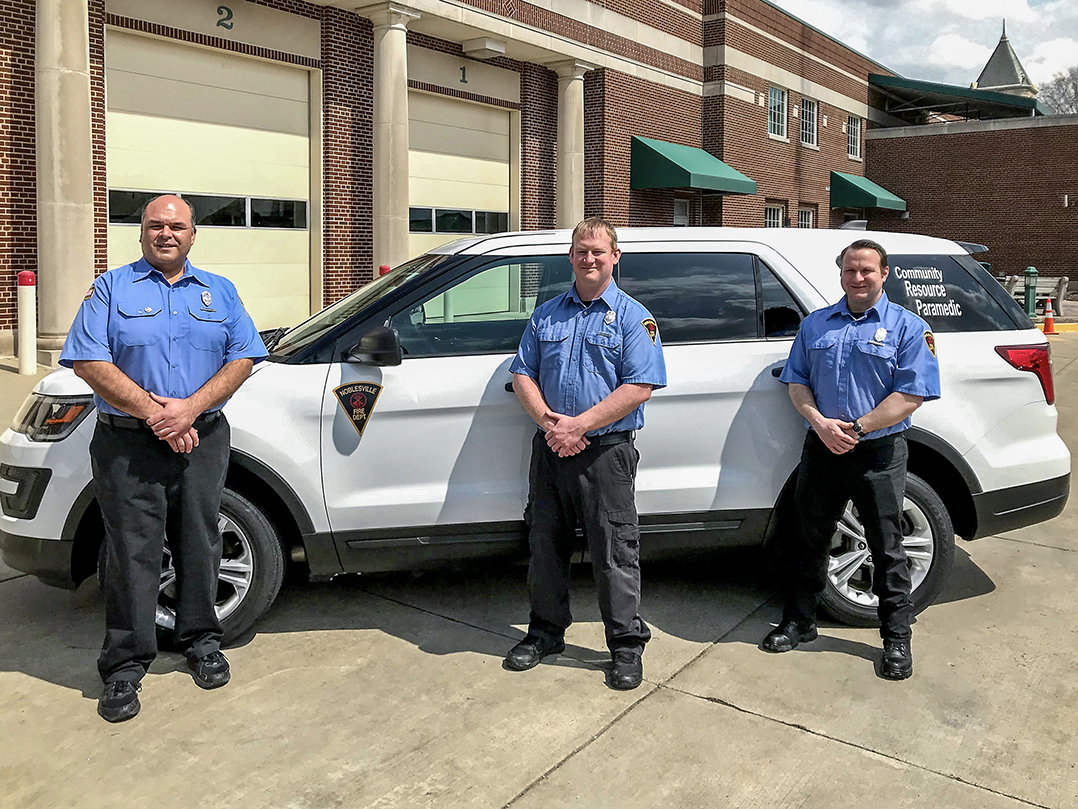 Officer Ben Lugar is operating in his police squad car, but his goal is to change to an unmarked vehicle to minimize the stress and fear associated with a traditional police car.

“Part of the program will be going out and doing follow-ups, and I don’t want them to see a police car out front, which can increase that stress,” Lugar said. “We will probably be using an unmarked police car, and the fire department will have a new community resource paramedic vehicle. (With mental health calls), they are already anxious and on alert. We don’t want to exacerbate that by making it worse.

“We have been studying best practices for those 911 calls and what are the best techniques, which is to not bring in the sirens blazing. How do we deescalate it and better understand the needs of those suffering? Putting them in the back of a squad car might not help their mental state.”