Moli Hall had quite the memorable turn of events in February.

“My amazing Atlanta agent, Houghton Talent, sent me the audition for the role of Payton and I immediately went to town researching everything about the show and the role itself,” said Hall, a former Carmel resident who lives in Atlanta. “I received the audition Monday night and had less than 48 hours to research, prepare the scene and film the audition. Less than 24 hours after submitting my audition, I got word that I had booked it, and four days later I’m out in Savannah filming. 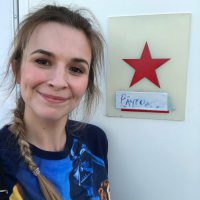 Moli Hall on the set of “Council of Dads” outside her dressing room. (Submitted photo)

“The entire process from receiving the audition to booking and actually starting filming all happened in a week’s time. Talk about a whirlwind.”

Hall will appear in the season finale of Season 1 of NBC’s “Council of Dads” July 2 (8 p.m., WTHR-13). Hall said she had an enjoyable time on the set.

“The entire cast and crew were so warm and welcoming throughout the entire process. I still chat with some,” Hall said. “I also had never been to Savannah nor Tybee Island before, so it was truly magical to open my trailer and be looking out onto the ocean and palm trees.”

The palm trees helped ease any nervousness Hall had.

The series is based on a dying father, Scott Perry, who asks three friends to help his wife by serving as father figures to his five children after he dies from cancer.

“Because of the premise of the show, working on ‘Council of Dads’ also reminded me that family is who and what you make it and that our loved ones never truly leave us,” Hall said. “They live through us through their imprint on the world and our hearts. ‘Council of Dads’ is such a powerful example of the power of love and warm acceptance. The story of the Perry family is truly beautiful and warms the soul. 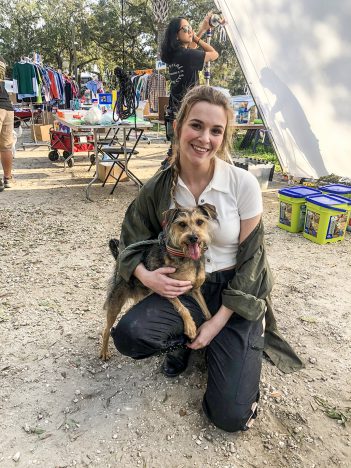 Moli Hall on the set of “Council of Dads” with canine co-star Mack. (Submitted photo

“I am so proud to be a part of such a powerful and ground-breaking show.”

Hall previously had small roles on “The Originals” on CW and on “The Walking Dead” and “Halt and Catch Fire” on AMC.

Hall, who moved to Atlanta in 2016, began acting in films for her father Dan Hall’s company when she was younger.

“The amount of work in Georgia is absolutely bonkers, and it only keeps getting busier,” she said. “The tax incentives in Georgia, along with the cost of living, infrastructure and the varying scenery, makes it very appealing to producers to film here. If you have the film bug and didn’t think about Atlanta, think again.”

Hall does modeling and voiceover work as well.

“I like to think of myself as a jack of all trades and a bit of a workaholic when it comes to the film industry,” she said. “Acting and film/TV is my true love, but the majority of my work is (voiceover) oriented or print work (modeling).”

She was the voice of the Indiana Voter campaign this year as well as in 2018.

“The last few years I have been dabbling more and more into production work, mainly directing and producing,” Hall said. “This year, I finally opened a branch of my father’s production company, Vizmo Films, in Atlanta, and currently I’m producing and directing a series of short films for a client, and I have plans to produce a series of my own this year as well.”