You are at:Home»Current in Fishers»Fishers Cover Stories»A united effort: Neighborhood residents work to save beloved bridge

When Spyglass Hill neighborhood residents discovered construction workers installing wood posts next to their beloved path, a few asked the workers what was going to happen.

When the neighbors learned there were plans to board up the bridge due to disrepair, they sprang into action.

“There’s a foot path that splits off from Knightsbridge Lane near the south end of the street and goes behind seven or eight houses and eventually goes over a creek there, and it’s about a 30-foot span. It’s a significant bridge with steel girders and wood decking on top, but the wood decking was in disrepair,” said Spyglass Hill resident Matt Saefkow, whose home borders the path. “It connects to the swim club and the fire station joint parking lots at 106th and Cumberland, and that creates a connection that’s safe for foot travel and bicycles to get through from our neighborhood.

“People use it to get to the other neighborhoods, and we probably see about 100 people a day walking the path.”

Because no one had been maintaining the bridge, it was set to be demolished because of liability risks. However, the owners weren’t aware that no one had taken responsibility for the bridge.

“We were alarmed because the previous owners of our home as well as at least four or five other neighbors whose yards backed up to the walking path two years ago or so had taken the property from the golf course (Ironwood Golf Course) that connected us to the path,” Saefkow said. “So, the original plots of land in the homes’ backyards didn’t extend to the walking path. There was 40 to 50 feet maintained by the golf course. (The golf course) offered the land to the homeowners for next-to-nothing.”

The land also came with the bridge, and the neighbors assumed the Legends at Geist Homeowners Association, which includes the Spyglass Hill, Haig Point and Sawgrass neighborhoods, would maintain the bridge and path.

Saefkow said the Legends at Geist HOA backed out of the agreement with the golf course but the community members weren’t aware of it.

“All the neighbors thought the HOA owned the bridge and was just neglecting it, but they didn’t own the bridge,” Saefkow said. “It came down to the terminal point of the golf course being fed up with having the liability and not having anybody to take it over.”

The course decided to board up the bridge, which led to efforts to save it.

“Our plan right now is to keep calling the city and HOA president until we get some form of an action plan about how to save the bridge,” Saefkow said. “We have had a couple responses from the HOA on the subject, and they said they had to get an assessment for the repairs and what they can do to take ownership of it.”

Saefkow said after one of his neighbors spoke with the Ironwood Golf Course, they learned the course was postponing closing the bridge because the neighbors were taking action.

“Hopefully, we can get it repaired or transferred to the ownership of the HOA,” Saefkow said.

Legends at Geist HOA President Barbara Beaven said the HOA is working through the process of acquiring the bridge in order to save it. The city declined to add the pathway into its trail system, so the group is evaluating the cost of taking responsibility for the bridge.

“We are very optimistic it will all be handled,” Beaven said. “It’s just a process we have to go through. We don’t want to let it go. It’s a nice little trail system for that neighborhood. We are landlocked over there without adequate sidewalks in that area, so it’s just a nice walking path for the residents.” 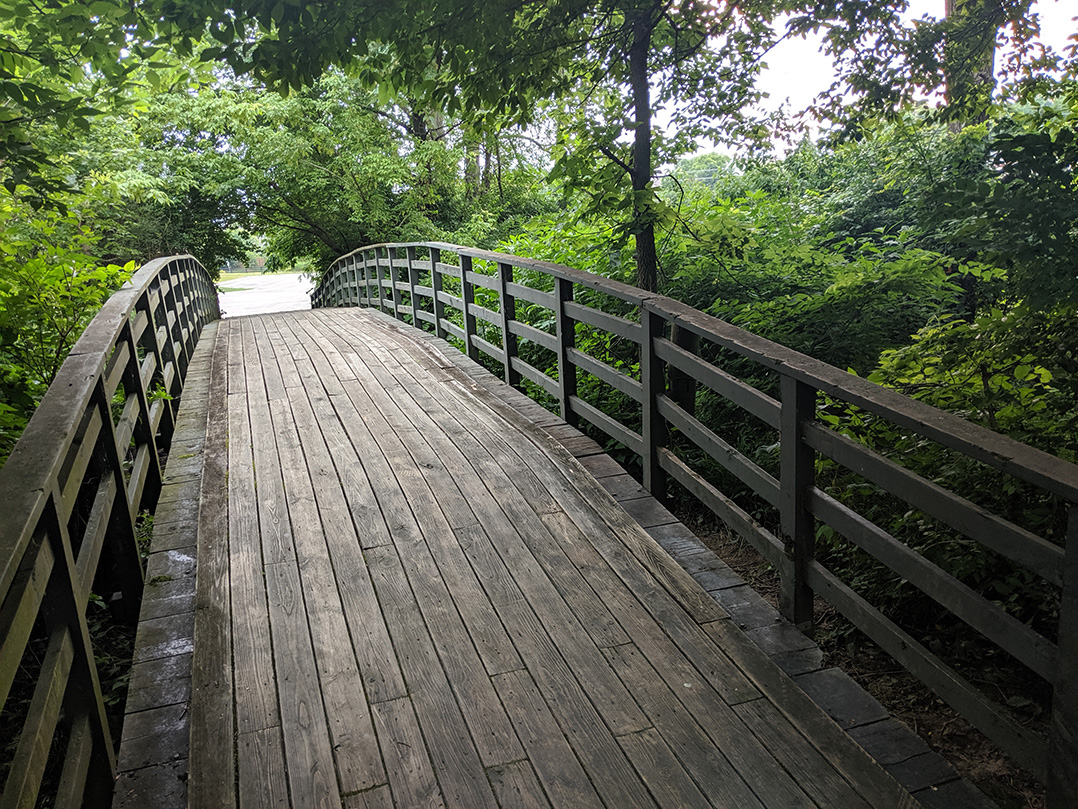 The bridge connects the neighborhoods to the swim club.

Spyglass Hill, Haig Point and Sawgrass neighborhood residents were upset when they thought the bridge safely connecting them to the swim club and tennis courts would be closed, and many of them congregated along the path and at the bridge to show their support for saving it.

“This, to us as a community, has really riled people up,” neighbor Matt Saefkow said. “It seemed liked a failure of leadership to keep (that decision) behind closed doors.”