The City of Lawrence recently received TechPoint’s Rising Tech City Mira Award. It was the second year of the award, and also the second year Lawrence applied for it. According to TechPoint’s website, the Rising Tech City Award “honors a city, town, region or community within the state of Indiana and celebrates the projects and the people behind them who have championed the location’s advancement with particular emphasis on tech friendliness. The emphasis is on developing compelling places where diverse, tech-skilled people want to live.” 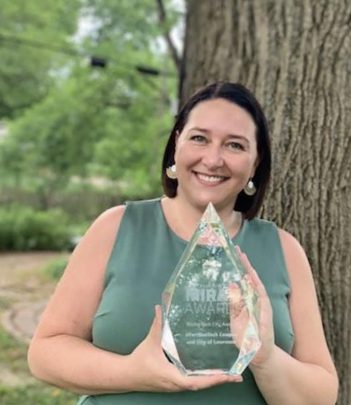 Last year, Lawrence was one of five nominees, so Fort Harrison Reuse Authority Executive Director Aletha Dunston said the city was thrilled to receive the award this year.

“The award was for Rising Tech City, and they created the award to honor communities putting tech at the forefront of their economic development strategy, and that can be done in a plethora of ways,” Dunston said.

Dunston said the biggest thing she believes Lawrence did to receive the award is the preservation of the Fort Benjamin Harrison campus in order to create an authentic campus a lot of other communities were trying to create from scratch. Preservation efforts included bettering the walkability with sidewalks and trails, adding green spaces, bike lanes, lighting and including art and ponds throughout the campus.

“It’s purely recognition, and it gives us the opportunity to market to a broader audience that we have something special happening out at the Fort,” Dunston said. “(The award helps us) get support on the map as a major tech hub.”

Dunston said the city did lots of legwork to complete an inventory of campus buildings and what economic sectors were thriving.

“We were thrilled to find 28 tech companies within a half-square mile of one another, which is impressive when you realize they are all in one- or two-story buildings and not a skyscraper,” Dunston said.”The city and state are really focused on keeping that area green and walkable and attractive to that type of investment and development.”

Lawrence applied for the award in January and was recognized during a virtual ceremony in June.

Last year, the City of Fishers received the award.