You are at:Home»Night & Day»Artist Profile»Lohrman pays tribute to her new city with release of “Roundabouts”

Valeri Lohrman has embraced her new home in Carmel so much that her album is full of song titles paying tribute to the city and surroundings. 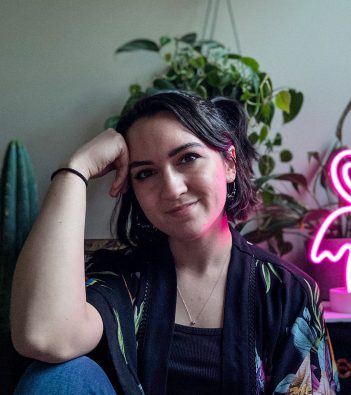 Valeri Lohrman, who goes by Louvena the Scout, moved to Carmel a year ago. (Submitted photo)

Lohrman, who performs under the name of Louvena the Scout, released her album “Roundabouts” July 17. The album cover features Carmel resident Oran Sands, who has made world records for time spent driving around Carmel roundabouts. The album also will be available as a CD.

The title track is one of the album’s 11 songs.

There is one song called “Sun-Blinded on 146th Street.” There is another one paying tribute to nearby Pyramids in College Park in northwest Indianapolis, called “Hieroglyphics in the Pyramids at College Park.”

“A lot of the things are inspired by Carmel,” she said. “There is a song about ‘Organic,’ which I work at Whole Foods, so it was inspired by that.”

Lohrman, 24, works at the Whole Foods at Clay Terrace in Carmel. Lohrman moved to Carmel from south New Jersey in July 2019.

“I had more friends here than I had in New Jersey where I’m from,” she said. “I had a friend that went to Indiana Wesleyan University and she introduced me to her friends that became my friends. It just kind of stuck.”

Her performance name Louvena the Scout was derived from the iPhone game center that randomly assigned her that name.

“I thought that sounds pretty cool, so I made it my name,” she said.

Her style is singer/songwriter with pop and indie rock elements. She plays piano and guitar. Dave Macey plays guitar on two of the songs.

In addition to songs inspired by Carmel and the surroundings, the songs are about heartbreak and growth. Lohrman wrote and recorded all the songs in her Carmel apartment. 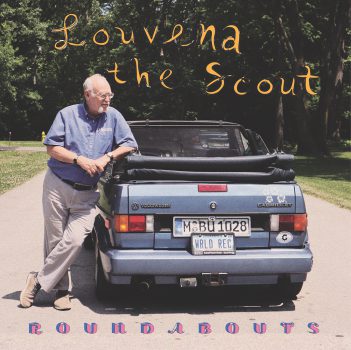 Roundabout record-holder Oran Sands is on the cover of the album. (Submitted photo)

“Two songs in particular stand out as personally very meaningful, ‘Hieroglyphics in the Pyramids and College Park’ and “Roundabouts,’” she said. “They essentially bookend this moment of growth, ‘Hieroglyphics’ signifying the end of this ‘lower’ part of my life, and ‘Roundabouts’ signifying a beginning to a better me. ‘Hieroglyphics’ still gives me chills when I listen to it. It’s likely one of my best songs, lyrically. It contains so much emotion and self-realization throughout. One particular musical interlude within the song was compared to something The Beatles would do. Some who have listened have told me it’s their favorite song of mine.

“‘Roundabouts’ makes me happy. When I play it in my car, especially going around a roundabout, of course, I feel this euphoria, this intense joy of knowing that I wrote this song, I wrote this album, I got through what I went through. I can’t help but dance and smile.”

One title is “Learning to Love the Girl in My Rearview Mirror, As Well as the View Out Her Windshield.”

“That long-titled track is certainly one of the main ones with that theme,” she said. “Here’s the kicker — that song is completely instrumental. It acts as a sort of interlude, a transition. You can feel this life-change happening within its music. It’s my sister’s favorite track.”

“I had an album that I released but unreleased it because I wasn’t super happy with it,” she said. “This is the first real release.”

Lohrman performed in a cover band in the Indianapolis area, including at Urban Vines in Westfield, in 2019 and earlier this year. She wants to perform more when more of the live music scene returns.

Carmel singer Kiriana Condon, a co-worker, is featured as a singer on the track,“Not Lola.”

“She always wanted to sing background vocals,” Lohrman said. “We recorded and I realized her vocals are actually good enough to be featured on one part of a song,” she said.