Not only does the Fishers Fire Dept. have a new headquarters, but another station soon will open.

The Fire Station 91 headquarters was completed in June at 2 Municipal Dr., Station 93, 10501 Allisonville Rd, and is expected to open in early September. Station 93 is affectionately called “The Hangar” due to its proximity to the Metropolitan Airport, said Capt. John Mehling the fire department’s public information officer. It will include an engine and ladder with up to eight firefighters.

“There is space to add another unit and crew as run volume increases,” Mehling said.

“The headquarters took about 14 months to build from when we started moving out to the temporary location at the Indy Fuel (apartment building) until we started moving back into the new facility,” Mehling said. “There are seven bays which will house the battalion chief, medic truck, engine, ladder, tactical truck, Inflatable boats and Rehab Support Unit. There are nine to 11 firefighters that respond from this station.”

In total, including the fire department administration and health department, there will be 18 personnel at the headquarters.

“Growth and construction type/size is always a consideration to assure an appropriate rapid response for emergencies,” Mehling said. “Over time, personnel, equipment and support resources have increased, requiring additional space that was not originally needed. The construction of these stations are commercial grade construction techniques, as well as equipment, in an effort to extend the life and durability of the buildings.

“The technology to enhance safety and health of firefighters has increased as well, such as gear cleaning, storage and positive-pressure living quarters to help assure carcinogens are blocked and removed.” 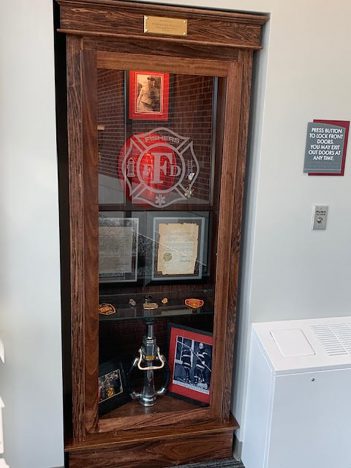 Mehling said Station 91 was able to reuse the fire pole from the old headquarters.

“We also saved and refurbished the alert siren that used to be on the concrete silo behind The Nickel Plate restaurant that alerted firefighters in the ’70s and early ’80s of an emergency in town,” Mehling said. “One of the true gems of this station is in the entry way to the administration portion of the station. On Oct. 13, 1967, Fishers Assistant Chief Raymond “Bud” Moulder died in a fire assisting Noblesville Fire Dept., in which his last act was to save another firefighter from Westfield Fire Dept. from a falling wall. Bud was unable to save himself from that same wall. He left behind a wife and five small children that night.

“To commemorate and to never forget his sacrifice, the department has installed the Chief’s locker, which was built by his children and grandchildren. (It’s a) way for his family to lay place for a man they barely had the chance to know and a reminder for the firefighters that have come after him what ‘brotherhood’ and loss means.”