You are at:Home»Current in Zionsville»Zionsville Cover Stories»Finding her why: A Zionsville mom’s journey after loss

Zionsville resident Laura Murakami had a stillbirth in 2017, and all she could ask was, “Why?”.

“I had never been through anything like that,” Murakami said. “My life had been pretty, I don’t know, I guess, easy. I had never gone through a trauma, so I didn’t know how to handle this loss that I was feeling and this big ocean of grief I was in.”

For the past 10 years, Murakami has worked as a pediatrics nurse at Riley Hospital for Children and taught nursing at Purdue University as a continuing lecturer. Helping others through similar, challenging medical situations was her job, yet she was unable to find a way to cope with her own loss.

Murakami said it’s normal when dealing with a loss to question why it happened. She wanted to answer the question for herself and found it through yoga.

“The only thing I found after a while that helped me was yoga,” Murakami said. “Without yoga, I don’t really know where I would be. I feel like I really coped well with that loss single-handedly because of yoga.”

Now she wants to share her journey with other women. Starting Aug. 22, Murakami will teach a yoga class at IU Health North called Yoga After Loss. The idea is to provide a safe space for women. The class is for women who have had miscarriages, stillbirths or lost an infant soon after it was born. The class will be streamed on Zoom free of charge during the COVID-19 pandemic with no class-size limit.

“Sometimes moms would come into the hospital, and Laura would be teaching these classes in person, but during the pandemic, we have started offering a lot of these classes on Zoom,” said Berkley Rios, a marketing consultant of regional public relations and social media at Indiana University Health.

Murakami hopes that her unique yoga class, which she said to the best of her knowledge is not offered at other hospitals or yoga studios, allows women to connect through their shared experiences and learn to cope with their loss.

“I think finding yoga as a way to heal my grief and then sharing it with others, that was my ‘why,’ and that’s what I’m supposed to be doing,” Murakami said.

In March, Murakami became the newest yoga instructor at IU Health North. Although she kept her position at Purdue’s nursing school as a continuing lecturer, she no longer works as a pediatric nurse so that she can focus on teaching. She has taught a prenatal yoga class in addition to a Mommy & Baby yoga class.

As a pediatric nurse, Murakami said she saw “bad things happen to good people that didn’t make sense” and that she had not experienced. She empathized with patients as much as she could, but after her own experience in 2017, she could relate in a markedly different way.

“It’s different when you’re experiencing it yourself,” she said. “When you’ve gone through grief and having to find ways to cope, I think now it makes me better able to relate to moms because I can understand their pain and maybe how it feels to have a loss like that. Grief is definitely different for everybody.

“I know that what helped me wouldn’t help everybody, but just knowing what helped me and being able to share that in case it does help somebody is really important and should be shared.”

The class will focus on gentle movement, breathing and breathing positions.

Yoga After Loss meets monthly and is free. Women do not need to have an affiliation with the hospital. For questions, call the IU Health North Childbirth Education office at 317-688-2465.

Laura Murakami, a Zionsville resident, said it would have been helpful to find a group of women who openly talked about their experiences with losing a child after she had a stillbirth in 2017.

It wasn’t until after she began to become more forthright with her own experience that she found women who shared similar stories. Murakami said miscarriages and stillbirths are “something that people don’t talk about.” 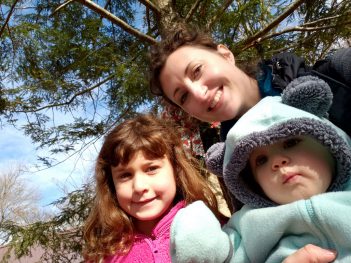 “I don’t know if that’s because it’s too painful, or I don’t know if it’s just like any difficult situation, and people don’t know what to say or how to hold space for being with somebody in their grief,” Murakami said. “I definitely went through times in my grief where I could sense that people maybe didn’t understand why I was so sad, because my son was never alive. He was never here and had a life and then was taken. He was taken right away, so I don’t know if people understood, necessarily, why I was sad about that.”

Murakami said she felt she needed a way to cope with her grief and to find people who could relate to her experience and the emotional toll it exacts. Now, instead of concealing grief, Murakami wants to encourage women to support each other through their grief.

“A lot of times, especially in our culture, we are not comfortable with grief,” Murakami said. “Our culture is very go, go, go, very fast-paced. So if you’re going through something difficult, which can take months, years, to deal with, to cope with, a lot of times you have to repress it so you can function. And I don’t think you can heal without facing what you went through. So talking what you went through, with all the emotions that come when you think about what you’ve gone through or talk about your story, is all part of healing. So there is definitely power in being able to give voice to your experiences of loss and grief.”