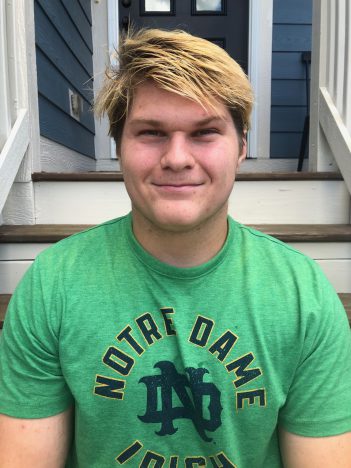 However, one stood out from the start.

“I visited Notre Dame Feb. 1 for their junior day, and within 15 minutes, I thought, ‘I have to go here,’” he said. “I just felt the tradition, academics and athletics were it for me. I was 100 percent set on it.”

Tanona got an offer from Notre Dame May 1; he told the Irish coaches of his commitment July 20 and announced it July 25.

The 6-foot-5, 290-pound Tanona became the first commitment for Notre Dame in the class of 2022 in July. ESPN ranks Tanona as the top player in his class from Indiana and 86th nationally.

“It definitely is a weight off my shoulders, and I can focus on this season and what needs to be done,” he said.

Scott Turnquist is in his second season as ZCHS coach. Turnquist heart there was a talented sophomore and he wasn’t disappointed. Tanona started at left tackle on a line that included senior center Gus Hartwig.

“Right from the start when I got there, you could just tell there was a lot of potential there with Joey,” said Turnquist, whose team is slated to open the season at Pike Aug. 21. “He really built on that, and we could see he was doing some really good things at a young age, so it was cool to see.”

“Against the teams we play in our conference (Hoosier Crossroads) – we play some teams from the MIC – it was cool to see him hold his own,” Turnquist said. “There were hiccups along the way here and there, but we were able to see him constantly improve and be extremely coachable. He continued to develop throughout the year and in the offseason as well. He’s developed nicely as far as his body and strength and conditioning.”

“I learned everything from them,” Tanona said. “I was a sponge. Listening to Gus talk football was pretty incredible. I’m just focused on having a great offensive line as a whole this year. We are losing some great players we had last year, but we just got to reload and go from there.”

In addition to football, Tanona is a shot put and discus thrower on the Eagles track and field team.