You are at:Home»Current in Carmel»Carmel Community»Owners of Pirate Cat seek to install memorial along Monon in Carmel

Amanda Cancilla wants to pay tribute to the “Mayor of the Monon.”

The moniker is an affectionate nickname for her feline, Pirate Cat, who died in April. Cancilla’s boyfriend, Matt Gufreda, heard about Pirate Cat from FACE, a low-cost animal clinic, approximately five years ago, and the couple adopted him. 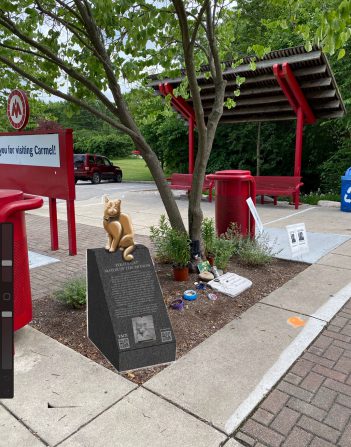 The owners of Pirate Cat are seeking to install a memorial to him along the Monon Trail where he liked to roam. (Submitted rendering)

The couple lives just south of the Carmel border in Indianapolis, but Pirate Cat liked to wander to the Carmel side and became a fixture on the Monon Trail. Cancilla has requested permission to place a statue monument to Pirate Cat — who rose to fame through social media and local news reports — at the 96th Street Monon parking lot.

“He started frequenting the Monon almost immediately, when he made it clear to us he was not to be contained in the house,” Cancilla said. “He loved the attention of all the trail users, and they loved him.”

Pirate Cat, who would beg continually to go outside, came home to sleep many nights, or at least came home every 48 hours, Cancilla said.

“We always knew where he was due to his GPS tracker,” she said.

Cancilla said a Facebook page was created in May 2017 in response to the constant phone calls about him.

“We thought it would be fun for people to see more about him via social media instead of immediately calling the pound or picking him up,” she said. “He now has 7,500 followers from around the world. Hundreds of them sent letters to the Carmel parks office hoping for this memorial.”

Cancilla recently spoke to the Carmel Clay Parks & Recreation board to ask its members to consider allowing the statue.

CCPR Director Michael Klitzing said he recommends that the park board establish a formalized process to consider statues in parks. He said there are no statues in CCPR parks at this time.

“We want to make sure whatever process we establish for the park system takes a broad perspective of the types of monuments that are typical for parks,” Klitzing said.

Cancilla plans to do the fundraising for the statue, and many fans have already expressed their support. The monument is expected to cost approximately $9,000.

“We have priced and contracted the piece. They are just awaiting Carmel’s approval,” she said. “The cat will be life-sized bronze on a granite base. We have a rough drawing of the proposed statue with a few tweaks needed. There is currently a nonpermanent memorial there that changes due to fans placing new things at the site.”