You are at:Home»Current in Noblesville»Noblesville Community»Noblesville Preservation Alliance to hold flea market 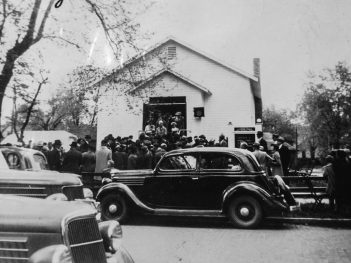 The 1938 grand opening of Christ Lutheran Church after the building was moved from Ohio. Submitted photo)

Because of the pandemic, the Historic Home Tour, traditionally held the third Saturday in September, had to be canceled.

“It just wasn’t going to be safe,” said Craw, the NPA board vice president. “I’ve always attended when Woodruff Place has its neighborhood flea market in Indianapolis. I’ve talked with other members and we thought this would be a good time to try something like this.”

Thus, the NPA Flea Market will be held between 9 a.m. to 4 p.m. Sept. 19 at Preservation Hall, 1274 Logan St. The hall, which was purchased in October 2019, will be the focal point for the flea market. Other homes along Logan and Clinton streets and side streets will have flea market sales. Craw expects approximately 20 homeowners to participate.

The homeowners make $20 donations to be part of the flea market sales at their homes.

“Some have been very generous and donated quite a bit more than that,” Craw said. “People are donating items to Preservation Hall for us to sell.”

She said the other homes will feature antiques, arts and crafts.

“One homeowner does sculptures, so there will be some art, and another homeowner repurposes furniture,” Craw said. “There is going to be a wide variety of stuff. We captured some of the salvage items from homes recently demolished. People remodeling their historic home and want some of those pieces, that will be an opportunity to get authentic pieces.”

After conducting a survey, board President Sandy Stewart said the board made the decision to cancel the Home Tour in July.

“It just wasn’t a time when most people felt comfortable opening their homes,” Stewart said.

Stewart said before the organization begins the renovation, it’s seeking to raise $25,000 to match the City of Noblesville Façade Grant. The hall was originally a church that was built in Ohio and moved to 1274 Logan St. in the 1930s.

“Of course, we won’t raise it all with this event, but we are trying to peck away at it,” Stewart said. “We have great plans. We’re going to put a new covered porch (in). The house has been modernized. We have to restore it to the age of the building.”

Stewart’s husband, Mike, and John Gilmore and friends will provide music on the Preservation Hall porch.

“The goal is to have music going most of the day,” Stewart said.

Donations of items to sell at Preservation Hall drop-off times can be arranged by contacting info@noblesvillepreservation.org, or by calling 317-426-1672.