You are at:Home»Current in Carmel»Carmel Community»City of Carmel shuts down website after discovering it had been hacked

Update from the City of Carmel:
“The City of Carmel continues to work on its disrupted city website, which remains offline. Our IT professionals are working on making repairs and restoring the website and we hope to have the website back online as soon as possible.
The investigation into how this happened is still ongoing. However, we want to clarify that there was no private information compromised. Carmel’s city website only contains public information. Transactions such as paying a city utility bill are done on third-party websites, which were not impacted by today’s disruption.

City services continued to remain open on Friday and those who needed specific services were asked to call that department or the main line into City Hall.

We will continue to update you as things change.” 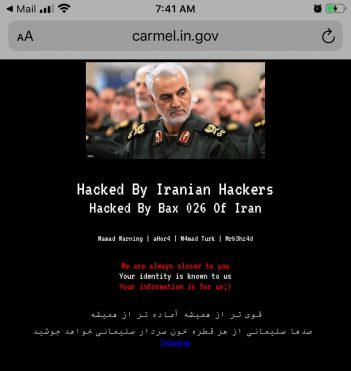 Visitors to the City of Carmel website the morning of Sept. 18 saw this message. (Submitted image)

The City of Carmel has shut down its web site after officials discovered it had been hacked.

“The City of Carmel discovered shortly after 8 a.m. today (Sept. 18) that its website had been hacked. Our IT officials immediately took the site down. We are working to determine what happened and are also working to fix the matter as soon as possible,” city spokesman Dan McFeely stated in an email.

Before the city took down the site, visitors saw a black background with white letters that said, “Hacked By Iranian Hackers” and “Hacked By Bax 026 Of Iran.” It also stated, “We are always closer to you,” “Your identity is known to us,” and “Your information is for us;).”

Iranian hackers have made national news lately for allegedly attempting to steal information related to U.S. aerospace and satellite technology and resources, among other things.

It is unclear at this point who is responsible for hacking Carmel’s website.