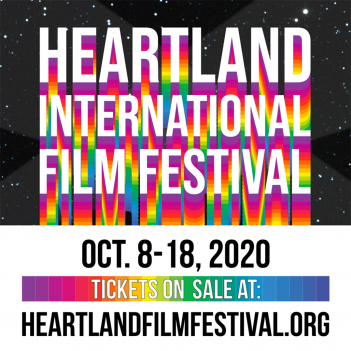 This year’s theme is “The Full Spectrum of Film” to celebrate the diverse genres, stories and perspectives showcased in the festival.
“The 29th Heartland International Film Festival is packed with films that are incredibly relevant to the conversations our society has every day,” Heartland Film President Craig Prater stated. “We have films that take you inside a Wuhan hospital during the COVID-19 lockdown (’76 Days’), that dig into the emotional landscape of Black males (‘BLACK BOYS’), capture the struggle of children dealing with the deportation of their family (The Great Mother), and even invite you to join a haunted Zoom call (‘HOST).”
HIFF29 may not be offering any traditional theater screenings, but you can still expect a fun festival atmosphere with unique Drive-Thru Red-Carpet photo opportunity at Tibbs Drive-In Theatre, special events such as Opening and Closing Night events, live virtual Q&A with filmmakers, virtual awards presentation giving away more than $60,000 in cash prizes, virtual and drive-in centerpiece films, and a Hitchcock Night at Conner Prairie.
Opening Night kicks off at Tibbs Drive-In Oct. 8, with the U.S. Premiere of “Eat Wheaties!” starring Tony Hale (“Arrested Development,” “VEEP,” “Toy Story 4”) and directed by Scott Abramovitch. This quirky comedy follows Sid as his life unravels as he tries to prove that he was friends with a celebrity, Elizabeth Banks, in college. The Drive-Thru Red-Carpet and live jazz music by Premium Blend begin at 6 p.m. The premiere screening begins under the stars at 7:15 p.m.
The special events continue with the Virtual Centerpiece screening of “Minari” from A24 and Director Lee Isaac Chung. The Sundance Grand Jury and Audience Choice Award-winning film follows a Korean-American family that moves to a tiny Arkansas farm in search of their own American Dream. The family home changes completely with the arrival of their sly, foul-mouthed, but incredibly loving grandmother. “Minari” is a tender and sweeping story about what roots us, and shows the undeniable resilience of family and what really makes a home.
“The Killing of Kenneth Chamberlain” will be the featured Drive-In Centerpiece film at the Tibbs Drive-In Oct. 15. While this film is based on a true story from 10-years ago, the message is very timely as it recounts the minutes an elderly African-American veteran with bipolar disorder is killed during a conflict with police officers who were dispatched to check on him. Morgan Freeman and Lori McCreary’s Revelations Entertainment have recently signed on as executive producers and the film will receive HIFF29’s Spirit of Change Award, to be accepted via video message by Kenneth Chamberlain, Jr.
HIFF29 will return to the Tibbs Drive-In Oct. 18, with a Drive-In Closing Night screening of “Blithe Spirit” from IFC Films featuring Dan Stevens as a best-selling crime novelist, Dame Judi Dench as an eccentric mystic, Isla Fisher as the picture-perfect new wife, and Leslie Mann as the spirit of the deceased first wife. This star-studded comedy will arise a few spirits and big laughs.
Fresh off its premiere at TIFF, IFC Films will also present the documentary “MLK/FBI” as HIFF29’s Virtual Closing Night screening title. Directed by Sam Pollard, “MLK/FBI” is the first film to uncover the extent of the FBI’s surveillance and harassment of Dr. Martin Luther King Jr. The film has been honored with Heartland Film’s Truly Moving Picture Award.
The full film lineup, drive-in schedule, fest passes, and ticket details can be found below or at HeartlandFilmFestival.org.