You are at:Home»Current in Carmel»Carmel Community»Jorgensen shares Libertarian views at Grand Park 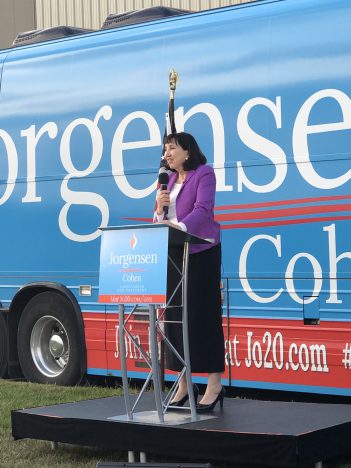 Libertarian presidential candidate Jo Jorgensen stopped by Grand Park for a rally to garner support and raise funds for her campaign.

Jorgensen is no stranger to presidential campaigns. She was Libertarian candidate Harry Browne’s running mate in the 1996 election. She also was party’s nominee for South Carolina’s 4th Congressional District in 1992.

Although her past campaigns were unsuccessful, Jorgensen is confident this year will be different.

“A lot of people who did vote for Donald Trump in 2016, including Indiana, because they did want an outsider who would cut government spending and reduce the deficit and reduce spending, and instead they got none of that,” Jorgensen said. “Everybody who voted for Donald Trump in 2016, if you were looking for a real outsider you need to look toward me.”

Jorgensen is running on a limited government platform.

“I tell people, ‘You know what is best for you, you know how to better spend your money than the bureaucrats in Washington,’” she said. “For central Indiana, as president I would leave you be and allow your state and localities to make their own decisions.”

During her rally, Jorgensen said was inspired to run for president by her grandmother, a native of Denmark, who told her it didn’t matter how much she worked, the government took away the extra money so everybody was left with the same amount. Denmark’s political system is a combination of a parliamentary representative democracy and a constitutional monarchy with a multi-party system.

“We are heading toward Denmark more every year,” she said. “So, it was my grandmother’s vision of liberty and the basic principles of the Libertarian party that bring me here today.”

Jorgensen said she continues to hear from voters that the system is not working. If elected, she said she would work to federally decriminalize all drugs and encourage states to treat drug use as a health issue instead of a crime.

“We should allow the medical community to deal with substance abuse in ways that salvages lives instead of throwing them away,” she said.

Jorgensen said she aplans to pardon anyone convicted at the federal level for “victimless crimes.”

Jorgensen also said she would end qualified immunity for police officers if elected.

“As your president, I will get government out of the way so my grandmother’s vision of the American Dream can be a reality for us all,” she said.