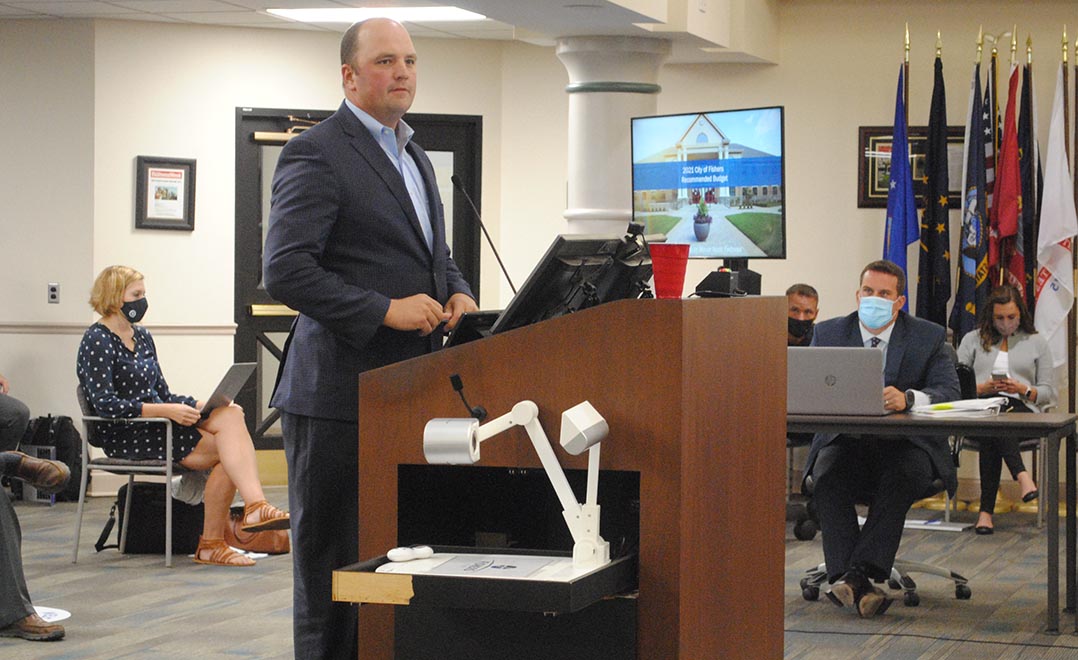 Fishers Mayor Scott Fadness acknowledges that budget planning is always a tricky proposition. But this year’s process was the most dizzying of his 15-year involvement with the city.

For example, he received late Information about local tax revenue that changed the budget only a few days before he presented it to the city council.

“I think you will find it has left us in good hands with a lot of opportunity moving forward, and we had just gotten some recent information as late as (the past) week that perhaps paints a rosier picture than even a week before,” Fadness said. “This has been a wild rollercoaster ride when it comes to the budget, but I think we are in a sound financial place.”

The new information came from the Dept. of Local Government Finance. The DLGF originally advised local government units to plan for a 10 percent reduction in income tax revenue. Fadness argued that because Hamilton County is still growing, he and his team estimated it would not be as impacted as other places in the state, so the team estimated a 1.8 percent decrease. However, the tax revenue didn’t decrease by 1.8 percent. Instead, it rose by nearly 11 percent.

“A year ago, we worked with (Indiana House) Speaker Todd Huston to pass legislation to change the inequities between Carmel and Fishers,” Fadness said. “Carmel has the same population with a little higher income per household, not much, but they receive $20 million more in income tax revenue per year than the City of Fishers due to a formula. So (after the legislation), any increase over 2.5 percent came to the City of Fishers to distribute.”

That led to the nearly 11 percent increase in revenue, which Fadness calls a “significant opportunity” for the city for distribution within the budget.

Prior to that information, Fadness and his staff had outlined a fiscally conservative budget with no additional staff, no raises and no significant infrastructure improvements.

“Given this new information, we feel we can make some strategic investments within our organization and still build cash for the future,” Fadness said.

“Given the new information, we feel very confident we can afford to build Station 97 in the northeastern part of our community,” Fadness said. “There are a lot of rooftops growing in that part of the community, and we anticipate calls for services to grow in that area.”

Mayor Scott Fadness said when the COVID-19 pandemic hit and lockdowns were implemented, the city took some extraordinary measures.

“We didn’t know the impact it would have on the business real estate property taxes, income taxes, so we started taking proactive measures,” he said.

The city froze all travel and training budgets and set those funds aside, which equaled $380,000. Because of the inability to hold large in-person events, the parks department identified $317,000 it could do without. The city reviewed open job positions and the need for seasonal hires and summer interns and, due to those reductions, saved more than $400,000. It also removed seven positions from the budget, resulting in $535,000 in savings. In total, the savings were $1,179,225 million.

“That money was set aside because we wanted to build up cash reserves going into what was an unknown 2022 and 2023,” Fadness said.

City officials approached the council requesting an additional appropriation of $2 million from the cash reserves to establish the Fishers Health Dept. to provide testing and services to residents. However, the city qualifies for $3 million through CARES Act funding, and Fadness expects the vast majority of that $2 million requested will be reimbursed.

“Those expenses we feel very confident can get reimbursed by the federal government, and once that cash comes back to the cash reserves, it puts us in a stronger position,” he said. 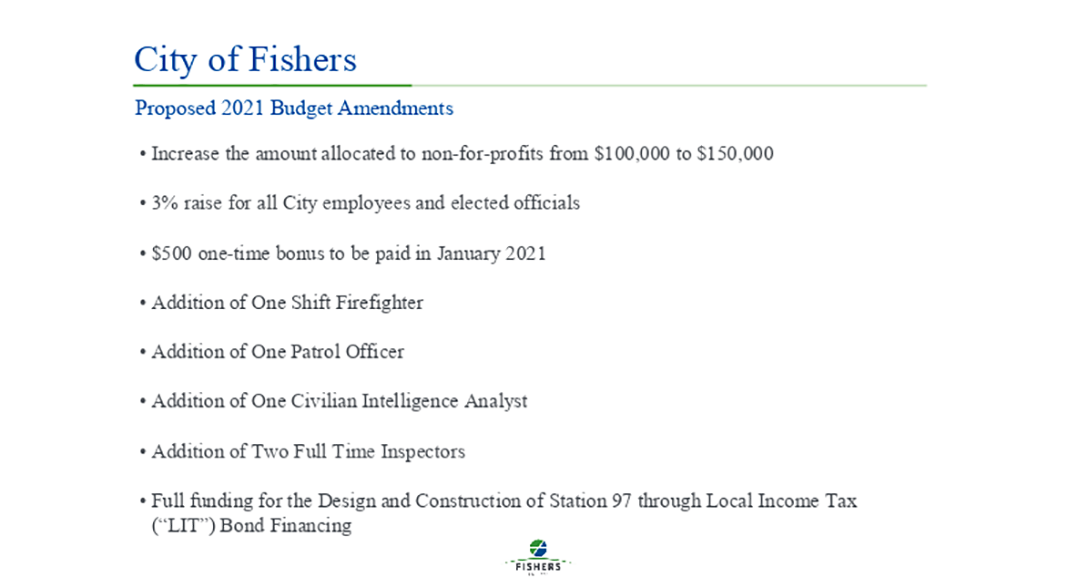 A list of suggestions Mayor Scott Fadness added to the 2021 budget after learning the income tax revenues would increase 10.8 percent. (Submitted image)