You are at:Home»Current in Carmel»Carmel Community»SewaDiwali donates nearly 10K pounds of food in Indiana

During the pandemic, many people have struggled to make ends meet, having no idea where their next meal is coming from. To help alleviate food insecurity, the SewaDiwali initiative, a collective of organizations and individuals from the Hindu, Sikh, Jain and Buddhist communities, joined together for Diwali to collect nonperishable food items, donating a total of 294,000 pounds of food to 26 states. 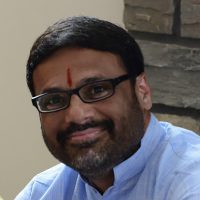 In Indiana, the initiative led to collecting and donating 9,900 pounds of food to three beneficiaries, including the Hamilton County Harvest Food Bank.

“We are blessed with so much and want to give back to the community we call home,” said J.R. Sandadi, a Carmel resident and volunteer for Indiana SewaDiwali.

The SewaDiwali program launched in 2018, driven by values of Dharma and selfless service. Sandadi said participation in the initiative skyrocketed this year.

Many children were eager to get involved. Some middle schoolers made flyers and went door-to-door asking for donations. Children from Zionsville created a video, pitching the service project and circulating it in their own communities.

But the service has not been restricted to Diwali, a festival of lights celebrated by Hindus, Jains, Sikhs and Buddhists. In early April, Sandadi and 12 others served meals to health care workers, buying meals from Indian restaurants affected by COVID-19.

In the future, Indiana SewaDiwali wants to expand beyond food, partnering with other organizations such as School on Wheels, Family Promise and the Million Meal Movement to incorporate a holistic service that touches on every aspect of people’s lives that have been affected by the pandemic.