You are at:Home»Current in Westfield»Westfield Community»Westfield council hears introduction for Lantern Commons

What happened: Council member Mike Johns was voted as the president of the Westfield City Council.

What it means: After Johns was appointed president, he asked council member Joe Edwards to serve as his vice president. Edwards accepted.

What happened: The Westfield City Council narrowly approved the establishment of A Hometown Heroes program, in which contractors associated with the city would mow lawns and clear snow from the driveways of active military members currently serving duty outside of Indiana and also Westfield public safety personnel injured in the line of duty.

What it means: Following a lengthy discussion with several concerns voiced by members Scott Frei, Cindy Spoljaric and Troy Patton, the council voted 3-3 with Spoljaric abstaining. Mayor Andy Cook voted “yes” on the project to break the tie vote.

What happened: The council unanimously approved the Courtyards of Westfield Planned Unit Development.

What it means: The development is proposed for the southwest corner of 151st Street and Towne Road. It is designed for empty nesters and active adults.

Council president Mike Johns called it an excellent project that would be in the right location.

What happened: The council heard an introduction for the Sanders Glen Planned Unit Development.

What it means: The Sanders Glen PUD is proposed for approximately 9.5 acres at 2432 South St. The proposal is south of the Midland Trace Trail, east of the Cottages at Sanders Glen and the Sanders Glen health care facility and west of the city services building. The project proposes three distinct areas. Area 1 would offer 26 for-sale single-family dwellings. Area 2 would offer 50 for-rent senior-focused dwelling units or apartments and Area 3 would offer 14 for-sale, single-family dwellings. No vote was taken since it was just an introduction, but Spoljaric mentioned concerns of the project not fitting into the area and also having a lack of usable open space.

What happened: The council heard an introduction for the Lancaster Phase 2 Planned Unit Development.

What it means: If approved, Phase 2 would consist of 36.2 acres at the northeast corner of 186th Street and Casey Road. The project proposes a rezone of the current Spring Mill Trails PUD District to the Lancaster Phase 2 PUD District. It would serve as a continuation of the Lancaster community immediately adjacent to the project to the east. Homes are proposed to begin in the mid-$200,000s and offer additional low maintenance housing options for first-time buyers and empty nesters. No vote was taken since it was just an introduction.

What it means: The amendment regards signage provisions for the out lots of the Maple Knoll PUD. No vote was taken since it was just an introduction. 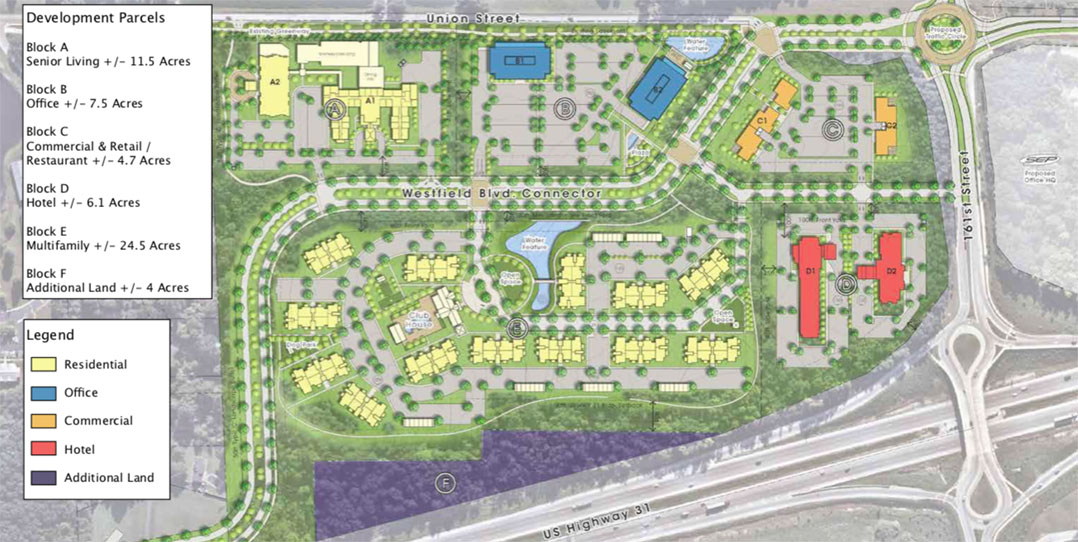 What happened: Council members heard an introduction for the Lantern Commons PUD.

What it means: Lantern Commons is proposed on 60 acres at the northeast corner of U.S. 31 and 161st Street. The proposal divides the project into five sub-areas, including Area A, which is designed for assisted living or memory care; Area B, which is designed to accommodate office uses; Area C, which is designed for low-profiled and neighborhood-oriented commercial retail businesses; Area D, which could be uses as two hotel sites or as corporate headquarter sites; Area E, which is designed as a multi-family community and Area F, which is currently residual property owned by the Indiana Dept. of Transportation, but which the petitioner plans to obtain if INDOT were to dispose of it. No vote was taken since it was just an introduction.

What it means: Amendment IV ensures that 214 apartments as part of the Wheeler Landing development meets the standards for the PUD.