You are at:Home»Current in Fishers»Fishers Community»College Students compete to design for charity

The challenge that NKBA Indiana presented in its 2021 Student Design Competition to a dozen college students from Purdue University and Ball State University was to design a kitchen. They were given a floor plan and a list of ideas that a future resident might want. The rest was up to their future interior designer’s imagination. The students were competing against their classmates but also against their rival school. The prize? The winner’s design would go into a brand-new Habitat for Humanity home in the city of their choice. 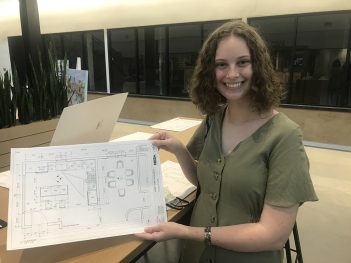 Lauren Cloonan a Carmel native and Ball State sophomore holds up her design for the NKBA Student Design Competition.

“It definitely made me pay attention more to the client,” Lauren Cloonan, a Carmel native and Ball State sophomore, said.

The event was hosted by NKBA, the National Kitchen and Bath Association. The NKBA holds both national and local competitions. This particular contest was the local contest.

“I choose state because I knew it was more close to the community and its through Habitat for Humanity family and it’s a small competition as well,” Cloonan said.

There were real life applications too. That was the aspect that drew Fishers resident, and Ball State graduate student, Emily Scully to the competition. 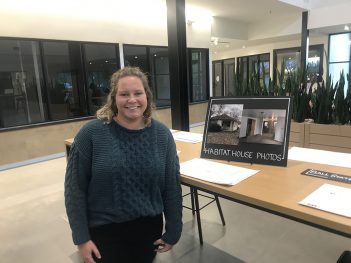 Emily Scully a Fishers native and Ball State graduate student wants to design floorplans at health care facilities after she completes her time at Ball State.

“It was more of a real experience because designing a kitchen is a lot of effort and a lot of work and I thought that would be helpful in the future. Also using the programs and the technology that we use is called Revit so it would give me more background experience,” Scully said.

Neither Hamilton county woman won the competition. Amber Scott, from Dale, Indiana, was the winner for Ball State. While Katlyn Griffin, Georgetown, Indiana won for Purdue and overall.