With cool band names like The Pandemics, Einstein and the Positrons and Electric Blue Octopus, April 30 promises to be a great night to celebrate amateur rockers – many of whom used the COVID-19 pandemic to dust off their guitars and drum sticks to join new bands with the help of The Rock Garage, a new music lesson center and rock band program based in the Castleton area of Indianapolis. 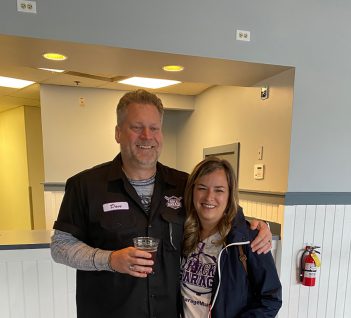 More than two dozen amateur bands will get the chance to play on the stage of one of Indy’s most historic venues as The Rock Garage presents a night of great music at The Vogue in Broad Ripple from 6 p.m. to midnight April 30. Tickets are on sale now for $10 and proceeds will go to the Indiana Independent Venue Alliance.

“This will be a historic night for so many of our musicians who have been working together and honing their skills at smaller venues during the pandemic,” stated Fishers resident Dave Foellinger, one of three co-owners and promoters of amateur music for The Rock Garage. “We have more than 125 members who are either taking lessons from our experts or have been placed in one of our bands, or both. They bring different talents and different skill levels, but they all share a love of playing live music on stage.”
Foellinger is the president and CEO of the Jack Laurie Group, based in Carmel’s Indiana Design Center.
Many central Indiana stages have been quiet for the past year, thanks to the pandemic shutdown and gathering restrictions, which led The Rock Garage to partner with the non-profit Indiana Independent Venue Alliance, whose mission is to help small businesses whose livelihoods depend on live music.
The event at The Vogue will feature 25 bands, most of them playing rock and roll music from the 1970s through today’s  heavy metal music. A few of the bands are focusing their sounds on the blues, Latin fare and acoustics.