A Carmel Police Dept. detective’s investigation helped lead to the arrest of a New Haven woman who has been charged with child molesting, child exploitation and possession of child pornography. 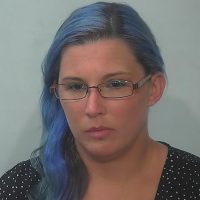 Jeanina M. Lowe, 33, is accused of creating sexually explicit images and a video of a 3-year-old male and sharing them with other users on the Kik messaging app.

According to a probable cause affidavit, in late 2020, CPD Det. John Pirics worked with the New Haven Police Dept. to investigate a case involving Lowe sending sexually explicit photos to a male younger than 18 years old in Carmel.

Pirics and a New Haven Police Dept. detective met with Lowe in December 2020 at a Panera Bread in Fort Wayne for an interview. Lowe initially denied her sexual relationship with the Carmel teen, which wasn’t illegal, but later admitted to it, saying that she thought he was 18 years old.

During the meeting with investigators, Lowe told Pirics that she had created sexually explicit photos of the 3-year-old male.

Lowe willingly gave officers her phone and showed them the photos and video she made of the 3-year-old victim. She told officers the victim sleeps with her every night and that she made the video and images while he was sleeping. Officers also found other pornographic videos involving children on Lowe’s phone.

Lowe told the officers that she used the Kik app to send exploitative files she created to others. An analysis of the phone showed she sent the files in November 2020 to users already known to Pirics from ongoing investigations involving child pornography, the affidavit states. Lowe told investigators she expected to receive $1,000 for each picture she created.

The affidavit states that Lowe admitted to making the child pornography because “she just wanted to come clean with everything.”

A hearing in the case has been set for June 21 in an Allen County court.