You are at:Home»Current in Carmel»Carmel Cover Stories»Journey for a Cause: Carmel High School grad aims to create more diversity in fishing, outdoor spheres

Throughout his life, Eddie Gill IV has encountered people who find his passion for fishing unusual.

“Oftentimes, growing up I’ve gotten some strange looks and comments from people who see me fishing or see me out in nature doing what I love to do,” said Gill, who is African American. “Even when I tell people this is where my passion lies, I get looks and comments.”

Gill, a 2018 Carmel High School graduate, has launched Journey for a Cause, a mission  to promote a more diverse and inclusive space within the boating and fishing communities.

“I want to create accessibility for people that have never had the chance to get into fishing or boating,” said Gill, son of former Indiana Pacers player Eddie Gill. “I want to get that in front of people that have never had that experience. For me, it’s such a peaceful thing for me to do, coming out by myself fishing, whether it’s a boat or bank. The mental health aspect is huge for me, and I think that can be a tool for so many other people, young or older or somewhere in between.”

A junior environmental studies major and basketball player at Grace College, Gill recently secured a $137,000 boat sponsorship with Parker Boats for a 10-day, 700-mile trip from Evansville to Navarre Beach, Fla. Gill and two friends will begin the journey June 1 in a Parker 2520 XLD boat. They plan to log between 20 and 120 miles per day.

Gill said he is incredibly grateful for Parker Boats’ sponsorship and its commitment to promoting diversity and inclusion in the boating industry and outdoor sports.

The fundraising goal for the trip is $20,000. All donations exceeding the costs for the journey, fuel, dockage, lodging, community engagement and incidentals will be given to various nonprofit organizations.

“That might be getting fishing gear for kids at these stops,” he said.

Gill cites a National Geographic article that “communities of color are three times more likely than white communities to live in nature-deprived places.” 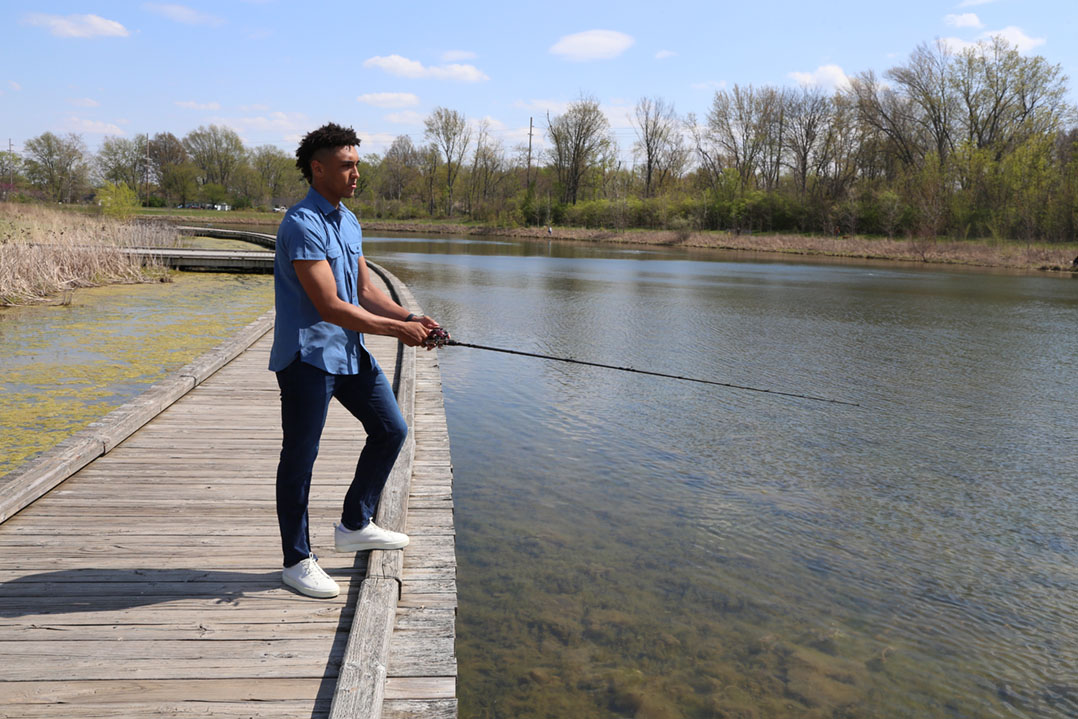 Eddie Gill IV fishes at Carmel’s Central Park. He will soon embark on a 10-day fishing trip from Evansville to Florida to promote a more diverse and inclusive space within the boating and fishing communities. (Photo by Ann Marie Shambaugh)

This disparity is what compels Gill to take the journey in June. He will be joined on the journey by two of his childhood fishing buddies, Justin Shupe and Clay Wright.

“Eddie and I went to elementary and middle school (at Sycamore School) together. We were playing basketball and we met Justin through a travel basketball team,” Wright said. “We started hanging out outside basketball and found we shared a common interest in fishing and outdoors. We stay at each other’s house and in the wee hours of the morning go fishing together. We all have an interest, but I’d say Eddie is the most passionate.”

A fishing journey like the one planned is something the three friends have discussed for several years.

“This has been a dream of ours for a while,” said Wright, whose mother is Taiwanese. “This would give us lifelong memories, and Eddie had the idea to not only make it fun but worthwhile.”

Gill learned to fish from his maternal grandfather, Gary Vipperman, who lives in Whitestown.

“He was my inspiration,” said Gill, who said he usually is a catch-and-release fisherman. “I got into it because of him and really from 3 years old. He has been a great role model for me. I’m so thankful he introduced me to this at a young age. Fishing and boating (are) such a big part of my life and has brought me so much happiness.” 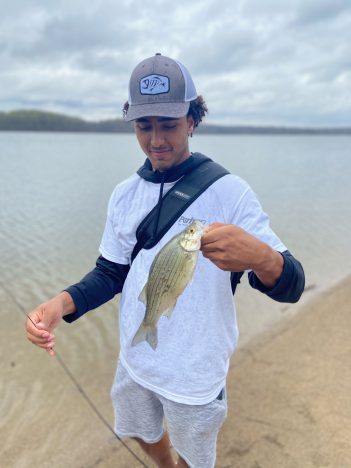