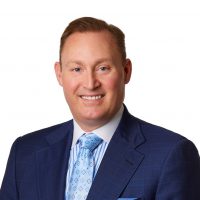 “Ryan and I had the shared desire to give back to the community,” said Wise, who is president and CEO of Wise Financial, a Northwestern Mutual private client group. “We formed this partnership to support families affected by childhood cancer with a fundraiser event.”

So, in 2018 they started Strike Out Cancer to support Peyton Manning Children’s Hospital. The event was held for the fourth time May 10-14 in a virtual format amid the COVID-19 pandemic.

Wise, a Westfield resident, was one of 16 recipients presented the Northwestern Mutual Community Service Award earlier this year in recognition for his work with Peyton Manning’s Children’s Hospital and the annual Strike Out Cancer event. Wise was presented a $20,000 grant from the Northwestern Mutual Foundation for Peyton Manning’s Children’s Hospital in April.

“Ryan and I bumped into each other a lot in philanthropic circles,” Wise said. “Through that, he invited me to a charity golf outing west of Chicago.”

That event was in memory of Allie Neff, a 3-year-old from Rochester, Minn., who died after a battle with cancer in 2006. Wise took a foursome to the tournament for a few years.

“That made me want to double down and really work toward raising money for this great cause,” said Wise, a married father of three.

In addition, Wise said he has several clients whose children have died from some form of childhood cancer. He noted that it takes a toll on the entire family.

“I’m always passionate, because I think with a lot of research, we can come up with a cure to strike out cancer,” Wise said.

Wise said he is encouraged by all the new treatments now available.

“Some of the children might have beaten cancer, but through all the drugs, chemo and radiation, they have disabilities or health challenges for the rest of their lives,” Wise said. “My hope is through the fundraising we are able to not only cure it but some of these side effects can be significantly reduced for children.”

“Mark has been one of the most generous supporters in the Indianapolis community since I met him many years ago,” Diem said. “He’s passionate about making a difference, especially in the area of pediatric cancer research and treatment.”