A Guerin Catholic High School student who has been encouraging young people to get the COVID-19 vaccine is organizing a clinic at her school during June and July.

Mia Thompson, a Westfield resident who will be a senior at the school in the fall, said she was excited to get the vaccine but became concerned when she learned that many of her peers weren’t getting it because of fears it was not safe or because they didn’t believe the disease was serious. 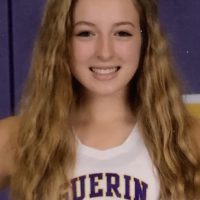 So, Thompson wrote an extended essay for her International Baccalaureate diploma on COVID-19 vaccine hesitancy. She took a survey of 325 people on social media, most of whom are from Generation Z. More than half of the respondents said that they weren’t planning on getting the vaccine and 68 percent said it was because they didn’t believe the vaccine was safe. More than half said it was because they didn’t think COVID-19 was serious.

“That worried me,” Thompson said. “I think a lot of people in my generation aren’t as informed as we need to be.”

However, 72 percent of respondents said they would get the vaccine if they didn’t have to wear a mask and social distance.

In the wake of the responses, Thompson reached out to the Hamilton County Health Dept. to see if it was possible to establish a vaccine clinic in Carmel. After receiving approval from the health department, she contacted Guerin Principal James McNeany to see if it could be held at the school.

The clinic, which will administer the Pfizer vaccine, will operate from 9 a.m. to noon June 19 and July 10. The Carmel-based Trinity Free Clinic is helping with staffing.

“With this location, I hope that more people will be inclined to get the vaccine so we can try and return to a normal high school in the fall,” Thompson said.

The vaccine clinic is open to anyone 12 and older. Register at ourshot.in.gov.