Debra Sexton’s fitness training is rooted in her gymnastics background.

Sexton, who competed in gymnastics at Seattle Pacific University, is the owner of FIT4MOM Carmel, a franchise offering fitness classes for moms. The Carmel resident was trained for all the prenatal and postnatal classes through FIT4MOM, as were her other six instructors. There are more than 2,600 franchises in the United States, but Sexton has the only one in Indiana. The first FIT4MOM started in San Diego 20 years ago. 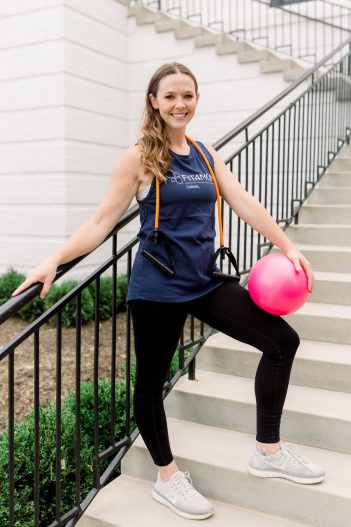 Sexton opened her franchise in September 2019.

“It’s for moms, whether they are pregnant or just had a baby,” said Sexton, mother of three children ranging from age 7 to 3. “We’re very specialized in women’s bodies and all the changes that are going on with children. We focus a huge part of our business on community, providing resources for moms, friendships and all kinds of activities for the kids. We’re doing the workouts with the kids to show them health care and exercise is important to us.”

“We’re most known for our stroller fitness classes,” Sexton said. “One is called stroller stride and the other stroller barre. You bring your baby, and we incorporate lots of singing, bubbles and tickling them, everything you can think of to entertain a baby while you are also exercising. We also have a run club.”

There is a body well session that comes with a meal plan, an eight-week program that is offered four times a year.

Sexton said the stroller classes are the best-known and the most popular.

“Once a month, we do Moms Night Out and do something fun,” Sexton said. “We do field trips with kids on days we don’t hold classes. We’ll meet up at the zoo, a museum or a park. We do meet-ups with local experts on different prenatal and postnatal topics, providing them resources outside of just fitness. We do community outreach projects. We donated a ton of supplies to Project Home Indy. The next one is the Indiana Diaper Bank.”