The Boiler Juniors 13 Gold team had just the right blend of individual talent and team chemistry.

“Everyone on our team is so good separately but we all get along together,” Reese Resmer said. “We have so many dependable hitters and passers, so we can count on everybody on our team to do their role. We are all really close, so we are super supportive of each other. We want to do well for each other.” 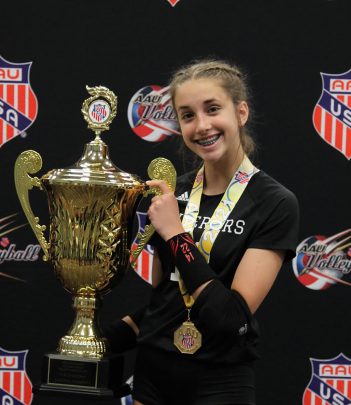 “It was a revenge match this year,” Resmer said. “We had such good competition there and it was fun hanging out with my team.”

Resmer, a 5-foot-9 middle blocker, has been playing with the Boiler Juniors for four years. Resmer said six girls have been with the team that entire time. Resmer was on the team, which won the 11-and-under AAU national championship in 2019.

For players, the only bad part is AAU is not partnering with Disney like it did in 2019.

“When we were 11, we were at ESPN World Wide of Sports and we were on ESPN3,” Resmer said. “Some of us did go to Disney the day after we won.”

The Boilers Juniors, part of The Academy Volleyball Club, practice in Lafayette, where the team is based.

Entering the USA Volleyball National Championship in Las Vegas, which started June 30, the team had an 81-14 record.

“After that tournament, we do a lot of beach volleyball the rest of the summer,” Resmer said. “Then I pick up on school volleyball in the fall and then we pick up on open gyms and tryouts for Boiler Juniors. It’s basically year-round for me.”

She did start competing in middle school track and field in the spring.

The team is coached by John Shondell and Chandra Hepler. Shondell is the associate head volleyball coach at Purdue University. Hepler, who is a former University of Missouri player, is the head coach at Warsaw High School.